2022 Audi Q7 SUV has been launched almost two years after it was discontinued due to stricter emission norms. The SUV now gets only a BS 6 petrol engine as Audi has ditched diesel altogether.
By : HT Auto Desk
| Written By : Sabyasachi Dasgupta
| Updated on: 03 Feb 2022, 11:28 AM 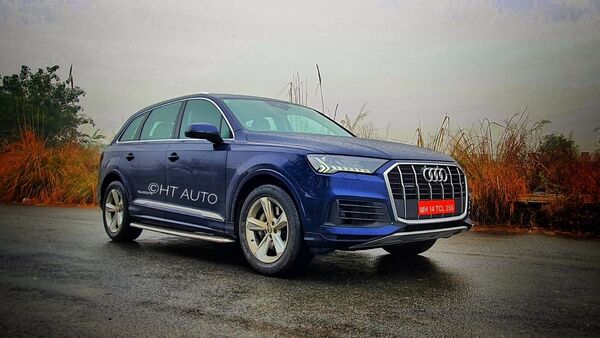 2022 Audi Q7 facelift SUV has been launched in India today at an introductory starting price of ₹80 lakh (ex-showroom). The bookings for the Q7 SUV had begun earlier last month at an amount of ₹5 lakh. Audi is offering the 2022 Q7 SUV in two trims, which include the Premium Plus and Technology trims. The price of the 2022 Audi Q7 goes up to ₹88.33 lakh (ex-showroom) for the top-spec trim.

The Q7 SUV is the second in Audi's Q series SUVs to be relaunched in India. In October last year, Audi drove in the facelift version of the Q5. Both Q5 and Q7 SUVs were pulled out of Indian markets about two years ago when BS 6 norms were implemented.

The 2022 Audi Q7 facelift SUV will take on rivals like the BMW X5, Mercedes-Benz GLS, Volvo XC90, and the Land Rover Discovery.

The relaunch of the Q series SUVs come with changes under the hood to meet new emission norms. Audi has removed diesel options for both Q5 and Q7. The 2022 Q7 SUV now gets a BS 6 compatible 3.0-litre V6 turbocharged TFSI petrol engine with Quattro all-wheel-drive system as standard. The engine, which is available on both trims, are paired to an eight-speed automatic transmission.

The performance of the Q7 facelift SUV with its new engine comes with improved figures of 340 hp of maximum power and 500 Nm of peak torque. The earlier petrol models of the Q7 had an output of 244 hp and 370 Nm of torque. The new Q7 SUV can accelerate from zero to 100 kmph in about six seconds and has a top speed of 250 kmph.

Besides the changes on the technical side, the 2022 Audi Q7 facelift SUV has also undergone several cosmetic changes too. The exterior of the new Q7 now gets a redesigned grille with chrome frame flanked by a new set of signature daytime running lights and Matrix LED headlights, larger air intakes and a redesigned LED tail lights with chrome treatment. The SUV also sits on a fresh set of 19-inch alloy wheels.

The interior of the new Q7 SUV has also been revamped with the addition of a few more features. The 2022 Q7 is offered with a new 10.1-inch main infotainment screen, an 8.6-inch touchscreen that replaces physical buttons to control its four-zone climate control system and a tablet-like entertainment screen for the second-row passengers powered by Android. The screen supports several apps from the PlayStore, including Gmail, Chrome and Youtube. The new Q7 also gets features like ambient lighting with 30 colours, B&O premium 3D sound system, air ionizer and aromatisation and electronic sunroof.