The 2022 Audi Q7 comes in two variants - Premium Plus and Technology. The Q7 is being assembled at the plant in Aurangabad and has an updated feature list as well.
By : Shubhodeep Chakravarty
| Updated on: 19 Jan 2022, 17:39 PM

The latest Q7 is powered by a 3.0-litre V6 TFSI petrol engine. There is no diesel on offer any longer.

Audi Q7 makes a comeback to the Indian market to once again take on the big players in the luxury SUV space. A proven power player for Audi in the country, the Q7 had to be taken off the shelves due to India's transition towards BS 6 emission norms but now, packed with a petrol motor under the hood, the model is once again ready to find homes in the country.

The Q7 has been the flagship SUV for Audi for years and years. But this time around, it comes to find that the throne among SUVs has been taken by a new elder brother - the Q8. But while Q8 is a solid proposition in its own right, it is the Q7 that is still likely to gain max attention at the Audi dealerships.

But what could be the factors helping the case for the 2022 Audi Q7? Check out our first full-drive review of the model: 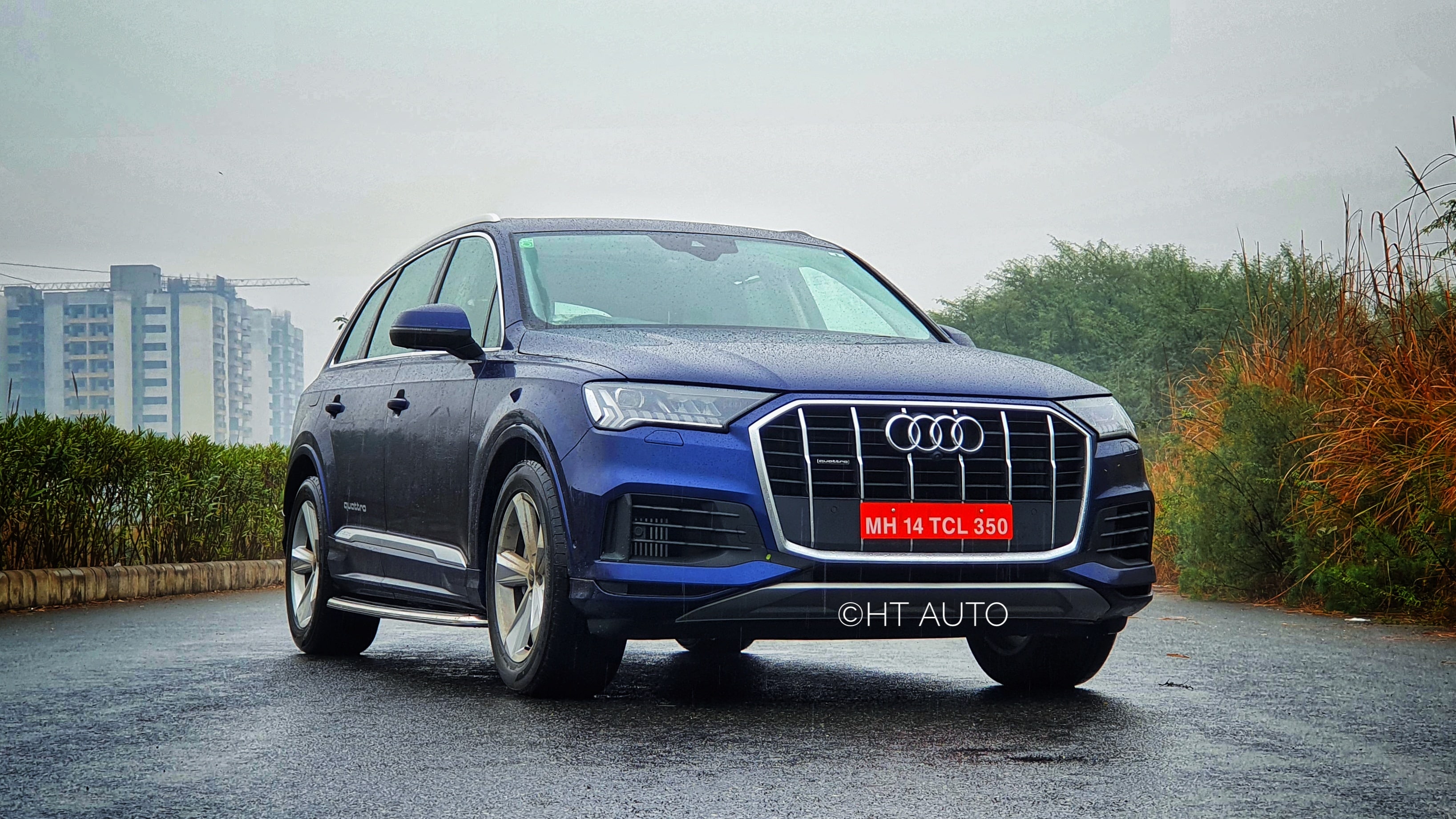 The latest Audi Q7 has a familiar exterior design element but look slightly closer and the updates are amply evident.

The 2022 Audi Q7 has similar proportions and design elements as the model that was previously discontinued. And yet, there are several updates that also give it a more prominent road presence than before.

Take the front octagonal grille for instance. Bigger and wider, it defines the face of the new Q7. Flanked on either side are updated head light units with a very catchy DRL signature.

The rear profile also now gets new LED tail light units and there is a very prominent chrome line running from left to right of the vehicle. The rear bumper design has been given an update as well while the alloy design is new too. 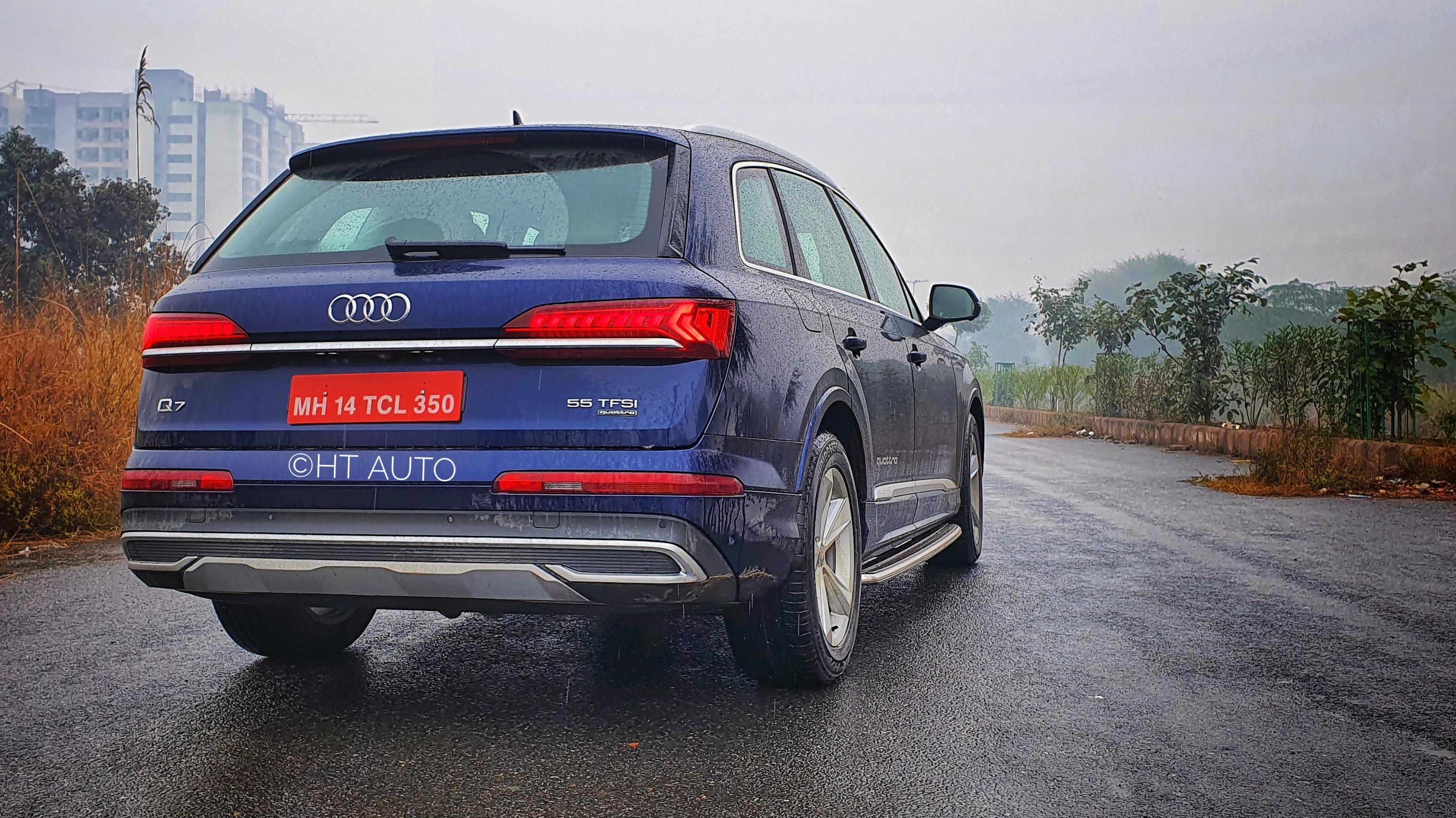 Did you know? The Q series is responsible for over 40% of Audi India sales in the country. With the return of Q5 and Q7, this could further bolster prospects for the Germans.

In terms of overall dimensions, the new Q7 is near identical to the previous model barring a minor jump in overall length.

In the Lap of Luxury

There wasn't ever any need to second guess the quality of upholstery and the levels of refinement and comfort here. The leather seats in beige add a dash of sophistication and the soft-touch materials on the dashboard and side doors is what one would obviously expect from a product like the Q7. 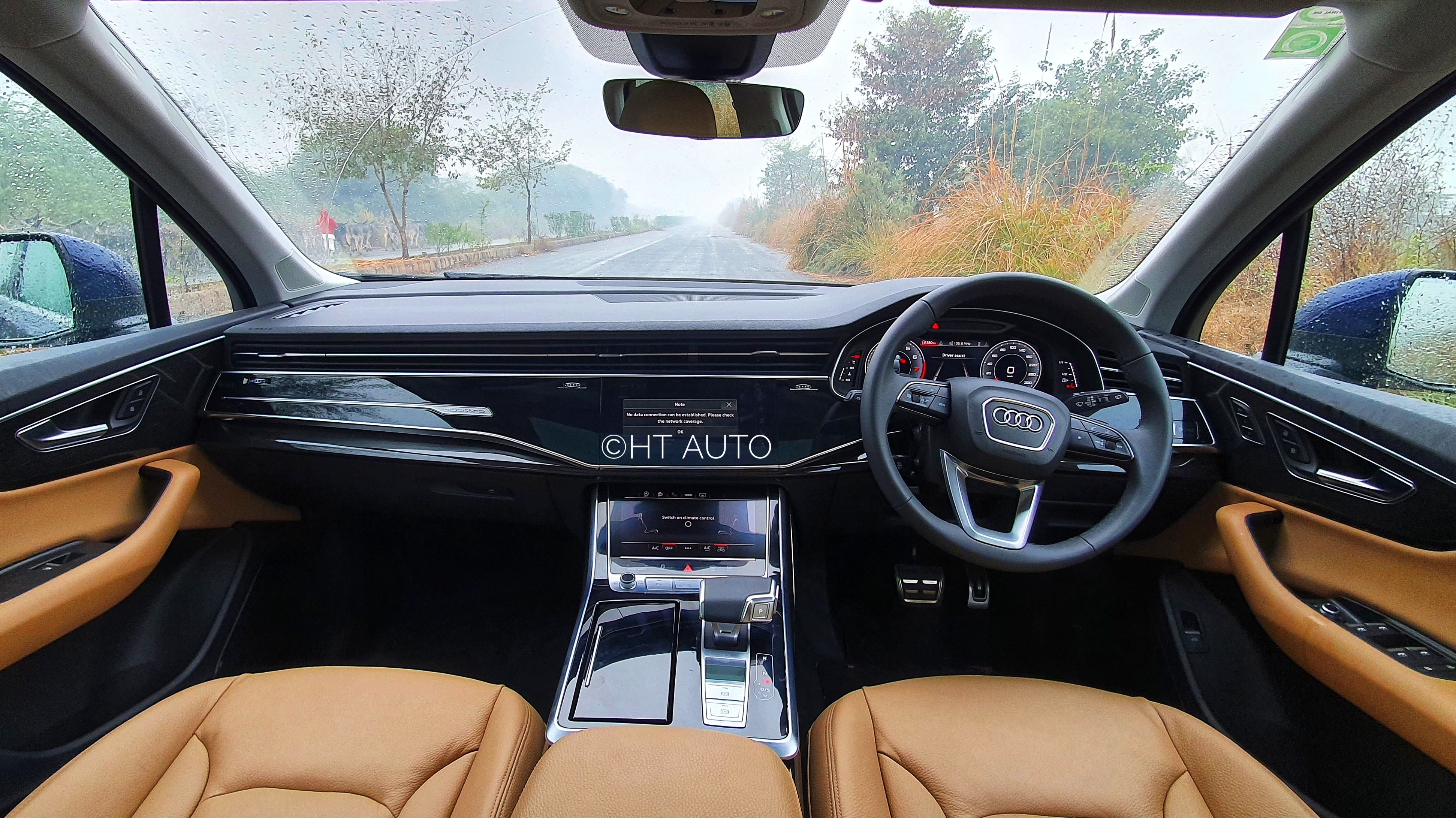 A look at the dashboard layout of the new Q7 from Audi.

What I particularly liked, however, was the debut of the twin MMI system on the Q7 which means the car has a dual screen layout. Not new in Audi vehicles but new to the Q7, the 10.1-inch main infotainment screen is perched high up and is vivid and responsive to touch. Below it is a smaller 8.6-inch touchscreen that replaces physical buttons to control the four-zone air conditioning system.

Because of the persistent rains, I spent more time inside the Q7 than admiring the looks from the outside and only once did I find myself with nothing left to discover - when it was time to hand the car back.

Whether it is the contoured ambient lighting, a comfortable ride and drive position courtesy front power seats, Audi phone box with wireless charging or the thump from the B&O sound system, each row of the Q7 offers plenty to occupants.

While I could not find any buttons for seat ventilation or massage, I was also quite happy to just hop back to the second row where there is even more to like. If for nothing else, the two tablet-like screens behind the front seats are an absolutely great addition. While these may look rather dated in visual sense, the screens are powered by an Android interface and support several apps from the PlayStore, including Gmail, Chrome and Youtube. 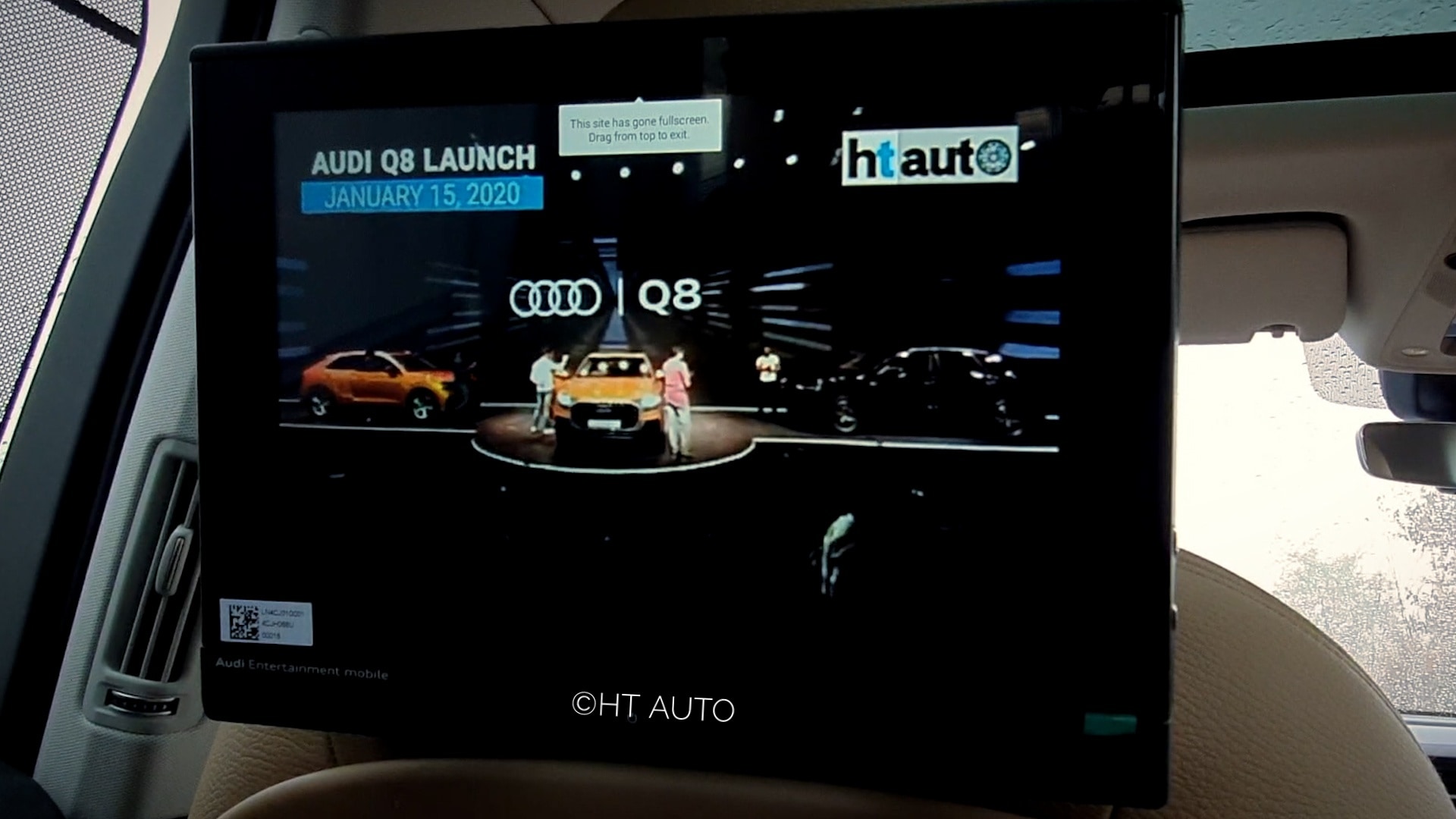 The feature-loaded yet easy-to-use interface on the rear-seat entertainment screen is quite a great addition to the new Q7.

Now as far as space inside this big SUV is concerned, there is not much to complain about either. The second-row seats are typically plush with good levels of cushioning and room to spread out the legs. Dedicated AC vents, plenty of charging points, large windows and a big sunroof further help matters.

The third row, however, may only marginally offer more room than what it did in the previous model but still is best for children alone. Best case scenario? Use the buttons to roll down the seats for even more boot space. Worst case scenario? Hunker down for the journey.

At the very core of the new Audi Q7 is a V6 turbo-petrol that is also what does the bulk of the work inside the Q8 and the A8 L. This engine is paired with an eight-speed torque converter gearbox and to once again make a robust case for itself on most terrain, there is the Quattro all-wheel drive. Ride quality offered by the Q7 is second to none and the tyres provide superb grip, even on wet road conditions.

The Q7 isn't quite sporty to drive, especially if you pit it against its older self with the diesel at its core. But there is more than generous amount of power for when needed. And that's best experienced on open highway roads where throttle responses are matched by impressive acceleration, impressive by SUV standards. Audi claims a zero to 100 kmph sprint in 5.9 seconds and if there is a clear stretch of road ahead, I am quite sure the figure is verifiable. That said, the Q7 is in its element not when sprinting but doing marathons. The eight-speed gearbox keeps the SUV moving with panache regardless of speeds.

What is expected and Audi also delivers is the control over NVH levels. While the diesel grunt is obviously missing, the noise insulation from outside and the engine bay is also a job well done. Add to it the adaptive air suspension and the Q7, yet again, shines bright on comfort levels.

The Q7 may not be the flagship SUV from Audi any longer but it still has no inhibitions to wear the crown. And in many ways, it deserves to. A plush-as-ever cabin, a solid drive trait and a dominantly stylish road presence make it this an undeniably Audi vehicle, one that returns to take on the likes of BMW X5, Mercedes-Benz GLE and the Volvo XC90.

At an expected price upwards of ₹80 lakh, the Audi Q7 isn't really the most affordable Q from the brand. But with its long list of updates, the SUV sure does make a solid case for itself and sits well balanced between the new Q5 and the opulent Q8.