Yezdi teases upcoming motorcycle for India ahead of launch next week

Mahindra-owned Classic Legends is all set to reincarnate the iconic Czech two-wheeler brand in India on January 13.The upcoming Yezdi ADV, or the Roadking ADV, will take on rivals like the Royal Enfield Himalayan.
By : HT Auto Desk
| Updated on: 06 Jan 2022, 10:04 AM 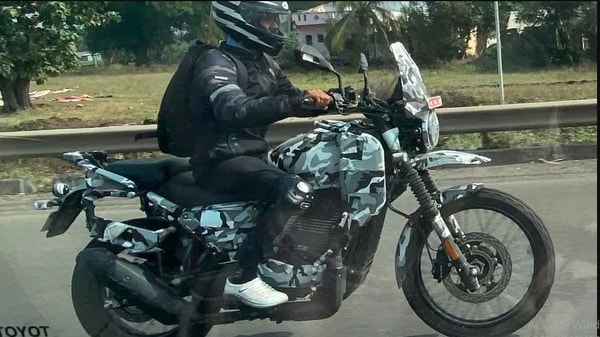 The new Yezdi ADV will come out to be a direct rival to the likes of the Royal Enfield Himalayan.

Mahindra-owned Classic Legends is all set to revive the iconic motorcycle brand Yezdi in India. The company has announced that Yezdi will officially launch its motorcycle on January 13. Ahead of the much-anticipated launch, the two-wheeler manufacturer has teased the motorcycle on social media platforms.

Yezdi is expected to launch as many as three models in India, which will include an adventure motorcycle, a roadster and a scrambler.

The teaser video shared by Yezdi shows a bike in action on a sandy beach. There is very little that can be ascertained from the video. But a closer look revealed that the bike has wire spoke wheels and twin exhausts.

Recently, the upcoming Yezdi ADV (or the Roadking ADV) was spotted testing on Indian roads. The new ADV will be a direct rival to Royal Enfield Himalayan among others.

According to several spy shots, the motorcycle will feature a round headlamp, a tall windscreen, beak-style front fender, jerry can holders, saddles stay, and a rear luggage rack. In addition to that, even the exhaust canister appears to be Himlayan inspired.

At the heart of the new Yezdi ADV is likely to be a 334cc, single-cylinder, liquid-cooled engine that churns out 30.64bhp and 32.74Nm. This engine is also seen on the Jawa Perak bobber. However, the company is most likely to tune the engine and transmission to match the adventure credentials of the bike.

The retro scrambler-inspired Yezdi two-wheeler, which will be one of the three models set for India debut, is likely to go on sale after the ADV is launched.

After the return of BSA and Jawa, Yezdi will be the third two-wheeler brand set to be revived by Classic Legends. Yezdi two-wheelers, which included motorcycles and mopeds, were first introduced in Indian market back in 1973. Its 250 cc two-stroke model was one of the most popular choices for customers in India.