Yezdi Adventure comes as the latest entrant in the adventure tourer motorcycle segment that is witnessing increasing number of models in recent times.
By : HT Auto Desk
| Updated on: 14 Jan 2022, 11:28 AM 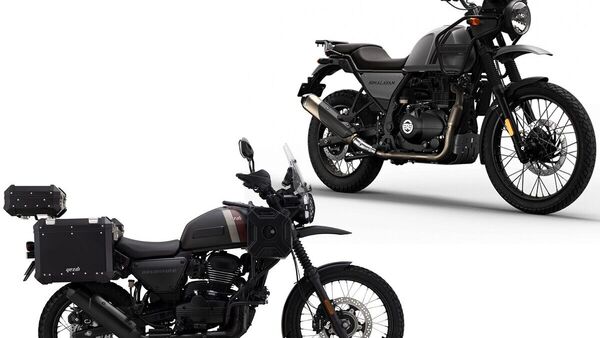 Yezdi Adventure and Royal Enfield Himalayan compete with each other in the sub-500 cc adventure tourer category.

Yezdi Motorcycles has come back to India after a 26-year gap bringing back the old and charming motorcycling aura. The iconic Czech motorcycle brand under the umbrella of Mahindra Group-owned Classic Legends has launched three motorcycles in its reincarnation attempt in India. These are Adventure, Scrambler and Roadster.

All these three motorcycles are targeted at a different set of buyers and designed for different riding purposes. The Yezdi Adventure is meant for riders who seek the thrill of adventure riding with a high-riding motorcycle. This comes targeting rivals like Royal Enfield Himalayan, which is one of the popular adventure motorcycles in India since its introduction.

Here is a comparison based on the price and specifications of the two adventure motorcycles.

Yezdi Adventure motorcycle draws power from a 334cc single-cylinder, four-stroke, liquid-cooled DOHC engine that is clubbed with a six-speed gearbox. This same engine works in the other two models Yezdi has launched - Scrambler and Roadster. The engine is capable of churning out 30.2 PS of peak power and 29.9 Nm of maximum torque.

Royal Enfield Himalayan gets power from a 411cc single-cylinder, four-stroke, SOHC, air-cooled engine. The engine is mated to a five-speed constant mesh gearbox and it churns out 24.31 PS of power and 32 Nm of torque. The two adventure motorcycles stand close to each other in terms of power and torque output.