The Royal Enfield Scram 411 is said to be the more road-oriented version of the Himalayan with better highway cruising abilities.
By : HT Auto Desk
| Updated on: 10 Feb 2022, 12:09 PM 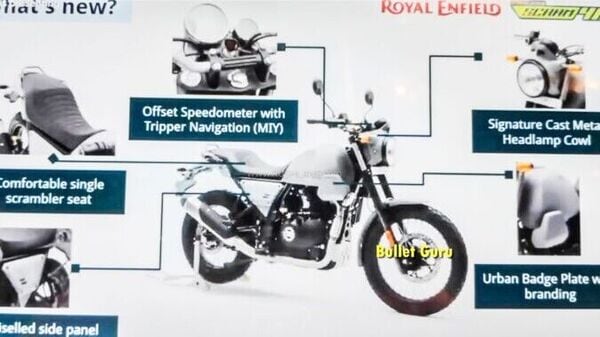 Scram 411 is basically going to be a toned-down version of the much popular Himalayan ADV.

Royal Enfield Scram 411 is likely to launch in the Indian market soon. The official brochure documents of the new model have now leaked online ahead of the launch.

While previously, the launch of the Scram 411 was slated to take place in February, it has now been delayed to March'22, sources told HT Auto previously. The launch was delayed due to the ongoing third wave of Covid-19.

To add to its road-biased nature, a number of previously found elements have been removed. For starters, now it does not get the dedicated racks at the front and rear. Apart from that, other key changes include the use of a smaller 19-inch front wheel, as compared to the 21-inch unit which is found currently on the Himalayan.

At the heart of the upcoming Scram 411 will sit the familiar 411cc, single-cylinder unit that is known to churn out 24.3 bhp of maximum power. The transmission will remain the same as found on the Himalayan. Also, Scram is most likely to ride on a smaller 19-inch front wheel, as opposed to the Himalayan's 21-inch unit. The rear wheel, however, will remain the same 17-inch spoke wheel.

When launched, the Scram 411 is likely to be priced somewhere around ₹1.90 lakh (ex-showroom). Other potential launches from Royal Enfield this year may include Hunter 350 or Shotgun 650 (SG650).