The custom Royal Enfield Himalayan 650 from Cooperb Motorcycles has been christened Interlayan 650. The Interlayan 650 also gets a full custom exhaust.
By : HT Auto Desk
| Updated on: 01 Feb 2022, 05:36 PM 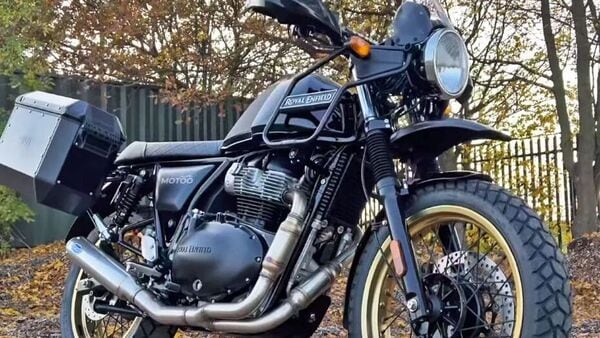 The Interlayan 650 also gets a full custom exhaust. The original Interceptor’s twin canister has been replaced with a two-to-one side-mounted exhaust sourced from S&S.

The UK-based custom house called Cooperb Motorcycles has come up with a custom Royal Enfield Himalayan ADV fitted with a 650 cc engine. The bike has been christened Interlayan 650 and it features Interceptor 650's platform.

The motorcycle has been notably tweaked from the inside out even though it has retained some key elements from the base bike such as headlamp, windscreen, fuel tank, and jerry can holders. Other than this, bits such as the dual-pod instrument cluster, chassis, seat, under seat panels, and of course, the 650cc, parallel-twin cylinder engine have been sourced from the donor model - Interceptor 650.

The Interlayan 650 also gets a full custom exhaust. The original Interceptor’s twin canister has been replaced with a two-to-one side-mounted exhaust sourced from S&S.

While Cooperb Motorcycles hasn't exactly revealed the performance figures of the motorcycle, it is expected to make power in excess of the stock Interceptor 650 that churns out 47bhp of maximum power and 52Nm of peak torque.

Other than this, the bike also gets some updated cycle parts such as different spoke wheels and suspension setup. Also, the road-tyres found on the stock bike have made way for the dual-purpose tyres. Other minor additions include panniers mounts to make the motorcycle more touring-friendly.

Needless to say, this custom Interlayan 650 may not be launched in the Indian market, however, Royal Enfield might have some different plans for the bike as it is reportedly planning a Himalayan 450 bike.

Moreover, Royal Enfield Scram 411 is most likely to be launched in the Indian market very soon.