Royal Enfield Classic 350 exported to the UK market is exactly the same unit sold in India.Royal Enfield has also opened its order books for the new Classic in the UK, however, the deliveries are set to begin only by March 2022.
By : HT Auto Desk
| Updated on: 01 Feb 2022, 11:00 AM 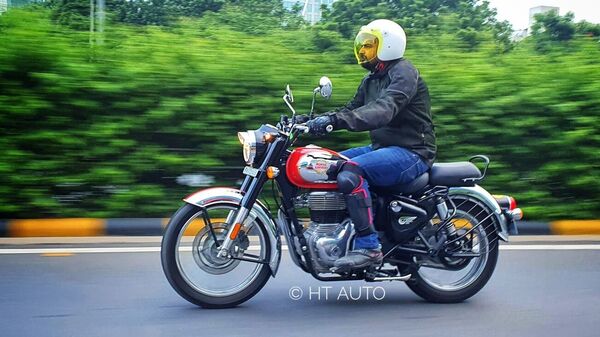 Royal Enfield Classic 350 entered the new generation last year. It was introduced in a completely new avatar that used the modern underpinnings from the Meteor 350 motorcycle. The bike was only introduced in the Indian market back then, but now the company has also launched the model in the market of the United Kingdom at GBP 4439 (approx. ₹4.46 lakh) there.

The Classic 350 exported to the UK market is exactly the same unit sold in India. It comes based on the popular ‘J’ platform that has been borrowed from the Meteor 350. Apart from the new platform it also uses a new and revised 349cc, single-cylinder engine from the Meteor. This engine has been rated to develop 20.2bhp and 27Nm.

Some of the key features on the motorcycle include the use of LCD instrument console with fuel gauge, trip meters, and clock as well a USB charger and Tripper Navigation system. Even though the India-spec model comes with a single-channel ABS version, the motorcycle exported overseas features a dual-channel ABS.

The company has also opened its order books for the motorcycle in the UK, however, the deliveries are set to begin only by March 2022.

Meanwhile, Royal Enfield is gearing up for the introduction of the new Scram 411 motorcycle in the Indian market soon. The bike is slated to go on sale in the country in the next few weeks. It will be a more-affordable, road-based version of the much popular Himalayan bike and it is likely to get improved highway riding capabilties.