Currently, the Royal Enfield Interceptor 650 is only offered with spoke wheel optionsApart from making the Interceptor 650 more modern aesthetically, the new alloy wheels will also give the bike a proper tubeless tyre setup.
By : HT Auto Desk
| Updated on: 02 Feb 2021, 06:01 PM 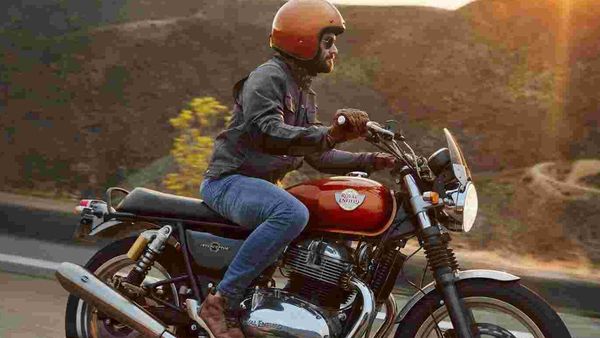 Apart from the Interceptor 650, the alloy wheels will also be introduced on the Continental GT 650 in the later stage. Photo courtesy: Royal Enfield

Royal Enfield Interceptor 650 is about to receive alloy wheels soon. The new alloys will only be available as an option and will not be part of the stock kit on the motorcycle. Existing or new customers will be able to upgrade to the new wheels at a price tag ranging somewhere around ₹10,000-15,000.

Currently, the bike is only offered with spoke wheel options. Apart from the Interceptor, alloy wheels will also be introduced on the Continental GT 650 in the later stage.

Apart from making the bike more modern aesthetically, the new alloy wheels will also give the bike a proper tubeless tyre setup. For the record, currently, the bikes are offered with tubed tyres shod with spoke wheels. Alloy wheels will also contribute to better high-speed stability and driving dynamics. Expect the optional alloy wheels to be added to the setup by the end of this month. More details to be available soon.

Apart from that, Royal Enfield will also introduce the new updated Himalayan 2021 soon. The bike was caught getting tested on the public roads recently. Along with the new colour options, the ADV will also benefit from the tripper turn-by-turn navigation system which was introduced for the very first time on Meteor 350. Moreover, other bikes on the list include a KX concept based cruiser with the same engine as in the Interceptor 650 and the Continental GT 650.

The Chennai-based bike maker has sold 68,887 motorcycles in the month of January. (More details here)