Royal Enfield Interceptor 650 and Continental GT 650 will receive a number of new colours with the MY21 update.Along with the new colours, both the bikes will also likely be given the Tripper Navigation system.
By : HT Auto Desk
| Written By : Prashant Singh
| Updated on: 26 Feb 2021, 09:49 AM 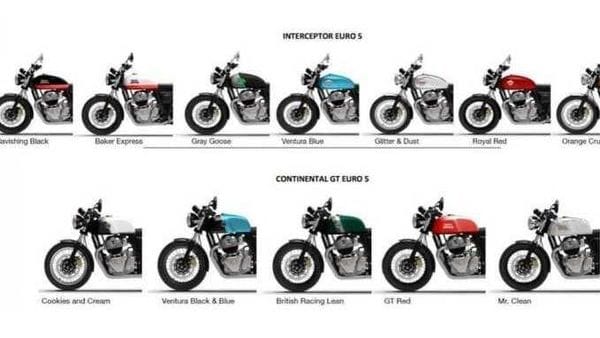 Along with the new colours, both the bikes will also likely be given the Tripper Navigation system.

Royal Enfield is gearing up to introduce a number of new colour options to its Continental GT 650 and Interceptor 650 bikes. As per a leaked image (above), the Chennai-based bikemaker will introduce four new colour options on its Interceptor 650 bike. The new options include Ravishing Black, Grey Goose, Royal Red and Ventura Blue paint schemes. The fresh paint schemes will be sold alongside the existing options - Baker Express, Glitter and Dust, and Orange Crush options.

The chances are that these options may be introduced with the MY21 update which will be launched in the next few months. Along with the new colours, the bikes will also likely be given the Tripper Navigation system which was first introduced on the Meteor 350 and was later added on the Himalayan. While there may be additions to the paint schemes and features, the 650 cc twin-cylinder engine will likely remain unchanged.