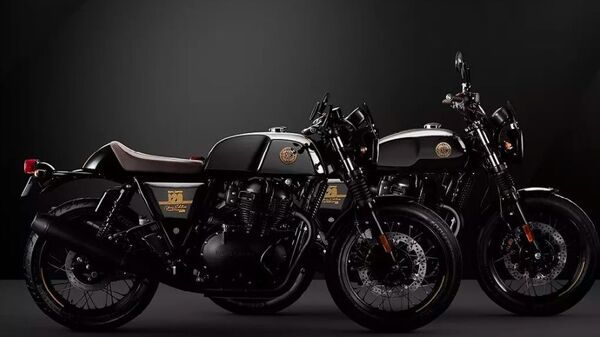 The special 120-Anniversary edition bikes are offered in Black Chrome.

Royal Enfield is gearing up for the introduction of its 120th Anniversary Interceptor 650 and Continental GT 650 in the European market. These models first broke cover at the 2021 EICMA. As mentioned by the comp previously, these bikes will available in limited numbers and 60 bikes of each model (120 in total) will be available for Europe. These bikes will also make their way to the Indian market in the months to come.

The special 120-Anniversary edition bikes are offered in ‘Black Chrome’ which was a process developed by the company in the 1950s. The bikes also sport completely blacked-out engines and exhausts. Other special edition accessories on these bikes include fly screens, engine guards, heel guards and bar end mirrors which are offered as optional on standard models. Other than that, there is also a handmade brass tank badge with a unique serial number for each bike. To make the exteriors even more interesting, the bikes also get contrasting, gold finish touches and the 120th Anniversary logos.

Apart from the exteriors, the rest of the details remain unchanged. The bikes continue along with the same 649cc parallel-twin engine, also the equipment including the suspension and braking hardware remain as is.

After Europe, these models will also be introduced in the Indian market and will likely cost higher than the standard models. While the Interceptor 650 Chrome costs ₹3.03 lakh (ex-showroom), and the Continental GT 650 Chrome is priced at ₹3.20 lakh (ex-showroom), expect the limited edition Interceptor 650 to be priced somewhere at around ₹3.25 lakh, while the Continental GT 650 could retail higher at ₹3.40 lakh, both prices ex-showroom. More details will be rolled out in the days to come.