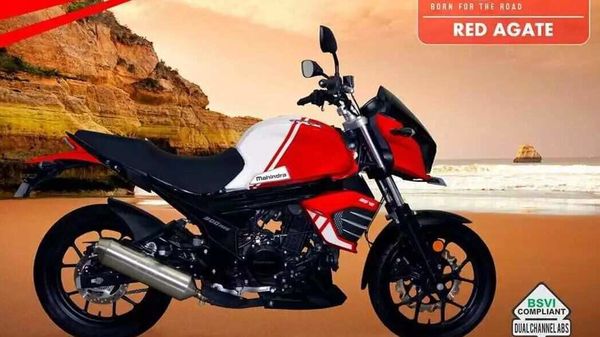 Mahindra is planning to launch the updated Mojo 300 soon. The bike has been officially revealed in a number of teaser images recently posted online. Apart from the Garnet Black colour option revealed in the past, the Mojo 300 BS 6 will also be launched in three more colours including Red Agate, Black Pearl and Ruby Red.

The Black Pearl colour option sports an all-black paint scheme with contrasting white shade on the seat. It also gets a white Mahindra logo over the side of the tank panel. Unlike the Garnet Black and Ruby Red options, the Black Pearl option doesn’t feature red tapes on the rims.

Save for the exterior paint scheme, rest of the design details remains the same. Surprisingly, Mahindra hasn’t changed anything in terms of its overall design. The Mojo 300 BS 6 still carries over the same large, twin-pod headlamps, chunky radiator guards, single seat, muscular fuel-tank and stubby tail section as seen on the previous BS 4-spec model. Albeit, now the lighting is expected to be full LED.

Though the mechanical revisions aren’t available yet but the bike is expected to source power from the familiar 295 cc, single-cylinder, liquid-cooled powertrain which will be BS 6-compliant now. In terms of output, previously the bike was rated to deliver 26 PS of maximum power and 28 Nm of peak torque; the updated figures are likely to hover around previous output only. Moreover, the engine will continue along with its six-speed transmission.

The bike’s equipment and cycleparts including the suspension and braking hardware will continue to remain the same as before.

(Also Read: Back to the roots: Jawa Motorcycles shown green light for Europe)

The motorcycle is likely to cost around ₹10,000 more than the BS 4 model.