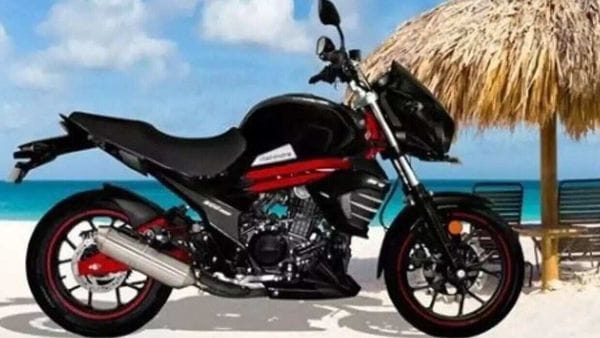 Mahindra is all set to introduce the new Mojo 300 ABS BS 6 in India. A glimpse of the updated model was shared a few days back in a teaser image posted over company's social media handles.

As the launch inches near, Mahindra has now provided a clearer view on the bike featuring a new Garnet black colour scheme. It will be adorned with a fresh all-black paint scheme featuring bright red paint highlights on the frame and swingarm. Save for the new exterior colours, rest of the design details remain as is.

Mahindra could have used the new update as an opportunity to iron out the previous design niggles, but sadly the cosmetic changes remain limited only to the paint. It carries over the same bulky front section featuring a dual-pod headlamp, muscular fuel-tank, chunky radiator guards, single seat and stubby tail section. New updates may also include LED setup, replacing the previous halogen lamps.

Though the core details aren't available yet, the bike will most likely feature a BS 6-compliant version of its 295 cc, single-cylinder, liquid-cooled powertrain. The company will introduce new mechanical updates in order to meet the stricter emission norms, as a result, the overall output may also vary slightly. Previously, the bike was known to churn out 26 PS of maximum power and 28 Nm of peak torque. The engine will continue along with its six-speed transmission.

As far as equipment and cycleparts are concerned, the bike will continue to be suspended on front telescopic forks and a monoshock at the rear. It will roll on 17-inch alloy wheels, also found on the Mojo UT 300. Its braking duties will be taken cared by disc brakes at both the ends. The brakes will work in conjunction with dual-channel ABS as standard.

The Mahindra Mojo 300 ABS BS 6 will compete against the likes of the new RE Classic 350 and the Bajaj Dominar 400. It will be launched at close ₹2 lakh (ex-showroom) price tag.