Mahindra Mojo 300 slated to make a comeback in BS 6 version, official teaser out 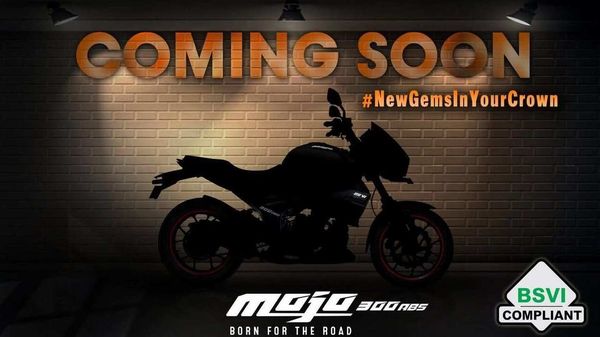 Mahindra on Monday announced the return of the Mojo 300 sport tourer bike via a teaser image posted across the company's social media handles. The Mojo 300 has been off sale due to non-compliance with the latest BS 6 emission norms.

For the uninitiated, the Mojo 300 has already been spied doing test runs on the public roads. As per the available details, the updated Mojo may not be a far cry from the previous BS 4-spec version. It will continue with its familiar twin-pod headlights, though now it is expected sport LED lighting. Also the design bits such as muscular fuel tank, single-piece dual-tone colour saddle, split-style pillion grab rail and an engine cowl, will also be carried over. The new BS 6-spec Mojo will most-likely sport a new colour scheme giving it a fresher look.

In terms of equipment and cycle parts, the bike will get conventional telescopic front forks and a rear mono-shock. The anchoring duties will be performed by disc brakes on both wheels and the brakes will work in conjunction with dual-channel ABS.

The Mojo 300 will now run on a BS 6-compliant 295 cc single-cylinder liquid-cooled engine. Its previous BS 4 version was known to churn out 26 PS of power at 7,500 rpm. Most likely, the new BS 6 unit will have a slightly lower power output.

The bike is expected to come out in August, but the launch date is not confirmed yet. In terms of pricing, it may be priced somewhere around ₹2 lakh (ex-showroom).

The Mahindra Mojo 300 is a direct rival to the likes of Royal Enfield Classic 350 and the new Bajaj Dominar 400.