The deliveries of new Mahindra Mojo 300 BS 6 will commence after its price announcement in August.Mahindra has started accepting pre-bookings on the bike at a token amount of ₹5,000.
By : HT Auto Desk
| Updated on: 29 Jul 2020, 04:20 PM 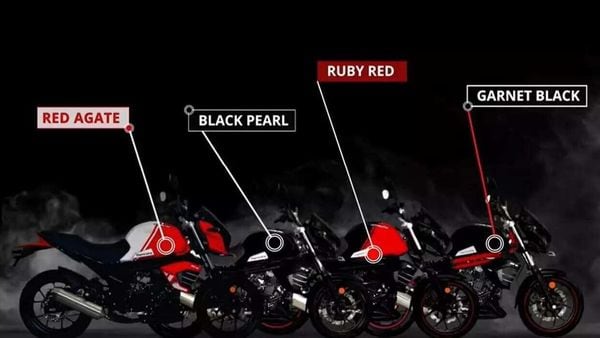 Mahindra Two-Wheelers is planning to launch the new Mojo 300 BS 6 in the Indian market soon. After revealing the bike in a number of teaser images in the past, the company has now launched its short teaser video.

As HT Auto has reported in the past, the BS 6-compliant Mojo 300 will be featured in four new colour options - Garnet Black, Red Agate, Black Pearl and Ruby Red. Mahindra has also started accepting pre-bookings on the bike at a token amount of ₹5,000 which is payable at the authorized company dealerships.

Deliveries of the new Mojo 300 will commence after its price announcement in August. Also, chances are that some customers might have to wait a little longer for the bike since not 100% dealerships are operational in the view of virus outbreak.

Apart from throwing light on the new colour options, Mahindra also claims that the Mojo 300 BS 6 will have improved refinement and efficiency. It will continue to source power from the same 295 cc, single-cylinder, liquid-cooled engine that produced 26 PS and 28 Nm in the previous BS 4-spec guise. Transmission duties on the new bike will continue to be handled by a 6-speed gearbox.

In terms of exterior styling, things will remain more or less the same, save for the new paint options. Its equipment list will include fat telescopic front forks and a rear monoshock unit. It will also continue to feature the same 320 mm front disc and a 240 mm rear disc. The brakes will be teamed up with the safety net of ABS.

(Also Read: Back to the roots: Jawa Motorcycles shown green light for Europe)

As far as pricing goes, the new Mojo 300 will retail at a premium of at least ₹5,000 over the last model.