A new installment in the KTM's RC series of sportsbikes could be in the making. The spotted prototype is said to employ the same 889 cc parallel-twin engine as its naked counterpart.
By : HT Auto Desk
| Updated on: 13 Feb 2021, 11:09 AM 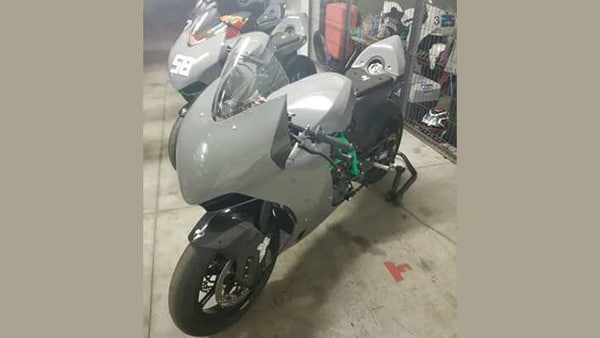 The spotted prototype is said to employ the same 889 cc parallel-twin engine as its naked counterpart. Image Courtesy: speedweek.com

The Austrian motorcycle maker might be planning to introduce a bigger installment in its RC series of sportbikes. A race prototype of the bigger RC has been spotted recently for the first time and reports suggest that it comes based on the 890 Duke motorcycle.

The spotted bike doesn't seem to have a headlamp, or a license plate. Also, the fuel tank has been positioned at the tail end which only hints at it being a track-only prototype. It can also be seen featuring a green dipped frame, racing slicks and a full grey-painted bodywork.

This could be taken as an indication that a bigger motorbike in the popular RC series could be in the making. Currently, the biggest installment in the RC series of bikes includes the RC 390. For the uninitiated, the full power RC8 superbike was taken down from the production lines in 2016 after the company dubbed the 200 bhp motorcycle dangerous for street riding.

The spotted prototype is said to employ the same 889 cc parallel-twin engine as its naked counterpart. Though the official tech-specs of the bike may not be available at the moment, the powertrain is known to deliver 115hp of maximum power and a peak torque of 91Nm, in the naked 890 Duke. In addition to that, more similarities in the form of electronics and rider package could also be shared with the 890 Duke. For the record, the Duke gets a slew of modern rider aids such as 6D IMU assisted lean angle sensor, nine-level traction control system and riding modes (Rain, Street and Sport). Also, optional bits include Track mode and Up/Down quickshifter.

Goes without saying, KTM will also make use of its racing experience from the MotoGP to fine-tune the chassis performance on the RC 890.