The initial bookings of the Kabira electric motorcycles started on February 20.The deliveries of the new electric bikes from Kabira Mobility will start in May this year.
By : HT Auto Desk
| Updated on: 03 Mar 2021, 15:56 PM 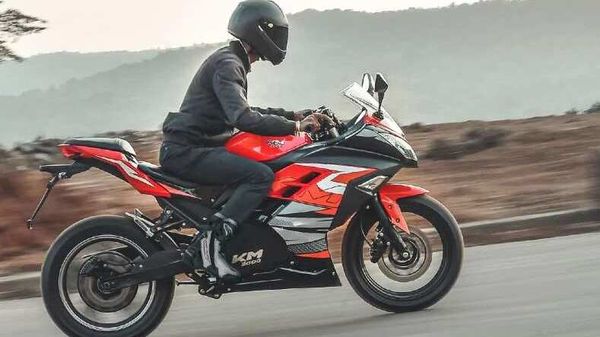 While the KM 3000 is a fully-faired sportbike model (pictured), the KM 4000 is a naked electric street bike.

Kabira Mobility has announced that the batch of its recently launched KM300 and KM400 electric bikes have been sold out within four days of launch. Both the electric bikes went on sale in India last month. The initial bookings for the motorcycles started on February 20.

The deliveries of the new electric bikes from Kabira Mobility will start in May this year and will be initially made available in nine cities - Ahmedabad, Delhi, Mumbai, Pune, Hyderabad, Bangalore, Chennai, Goa and Dharwad.

While the KM 3000 is a fully-faired sportbike model, the KM 4000 is a naked electric street bike. As far as technical specifications go, both the bikes can be charged in two modes. While the Eco mode allows the bikes to be charged in over six hours, the Boost mode charges the bike up to 80% in just 50 minutes. The KM 3000 has a peak power of 6000W and the KM 4000 produces a peak power of 8000W.

Currently, both the motorcycles are being manufactured at the company's manufacturing sites located in Goa and Dharwad, Karnataka. While the former plant has a production capacity of 10,000 units, the latter is capable of producing 8000 units. As per Kabira Mobility, it is currently in an advanced stage of ramping up operations. It is also planning to set up India's largest EV two-wheeler manufacturing plant at Dharwad which is said to have a monthly production capacity of 75,000 units per month.

"We believe that today’s young and mobile Indian has a strong appetite for powerful bikes simultaneously without causing any damage to the environment... we see significant potential for these bikes in India," said Jaibir S Siwach, CEO of Kabira Mobility on the launch of the bikes.