Followed by its international debut, the new Benelli TRK 502 is also likely to be announced in the Indian market sometime later this year.
By : HT Auto Desk
| Updated on: 21 May 2022, 09:49 AM 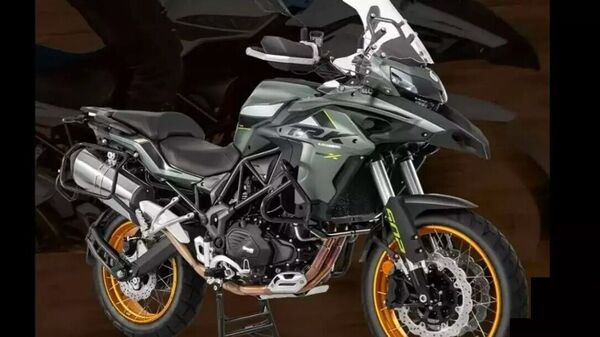 The new Benelli TRK 505 mid-sized adventure motorcycle has been updated with a lighter-weight body.

Benelli has announced the launch of the updated 2022 TRK 502 motorcycle in the market of China. Followed by its international debut, the motorcycle is also likely to be announced in the Indian market sometime later this year.

With the latest update, the new TRK 505 mid-sized adventure motorcycle has been updated with a lighter-weight body. There has been an overall reduction of close to 3.6 kg which is likely to bring out a positive difference when it comes to the final riding performance. The company has been able to reduce this weight majorly with the replacement of the steel swingarm with a lighter and supposedly more robust aluminum alloy unit.

In addition to that, the bike has also been updated with a slightly modified switchgear which is supposedly more premium than the previous unit. Furthermore, it has also been updated with spoke wheels that can also be fitted with tubeless tyres. Some other key features on the bike include the use of a full-colour TFT dash, heated grips and tyre pressure sensors. The use of these newly added bits makes the bike much more modern in comparison to the previous unit.

Leaving these changes aside, the rest of the bike remains more or less the same. The engine, platform, and the rest of the cycle parts have been carried over as is. At the heart of the bike continues to sit the same 502 cc twin-cylinder engine which comes paired with the 6-speed manual transmission unit.

The bike is likely to arrive in the Indian market very soon. And it will be placed at a substantially higher price than the existing ₹5.79 lakh ex-showroom price tag.