Home Auto Two Wheelers Honda Forza 300 Gets More Tempting With A New Update: All Details Inside

Honda Forza 300 gets more tempting with a new update: All details inside 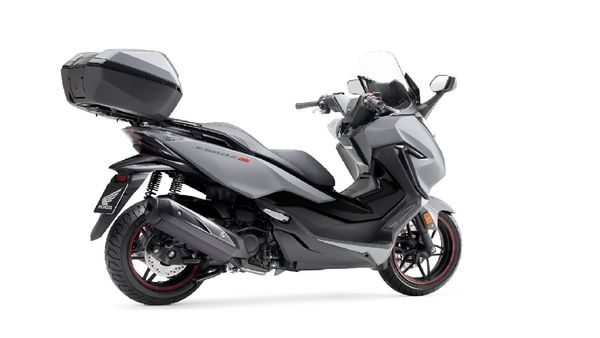 Honda has recently pulled the covers off the 2020 Forza 300 maxi-scooter in the international market. With the new update, the scooter has majorly received some new cosmetic changes, while the feature/mechanical package remain exactly the same.

As for the exterior design, it receives a new limited edition variant 'Air Force’ Grey dual-tone colour. It now comes draped in grey and gloss black dual-tone colour scheme. Apart from that, it also receives contrast red stitching on the leather seat, red rim tapes, and a new Forza 300 emblem. The maxi-scooter also features a colour coded 45-litre top box which is an optional accessory. Save for these minor changes, the scooter remains, more or less, the same.

What's rather surprising to note is that the scooter still comes as a Euro 4 compliant vehicle and misses out on the Euro 5 compliance. In terms of features it gets an electrically adjustable windscreen screen, full-LED lighting, smart key and a semi-digital instrument cluster which displays information like the rev counter, tripmeter, estimated range, real-time/average fuel efficiency, clock, and ambient temperature.

The scooter is known for its features such as the Variable Valve Timing (VVT) and the Honda Selectable Torque Control (HSTC, a variation of traction control).

In terms of mechanicals, it sources power from a 279cc, liquid-cooled, four-valve engine which belts out 24.8 PS of maximum power at 7,000 rpm and 27.2 Nm of peak torque. The power is delivered to the rear-wheel via a belt drive system.

While Honda has already delivered a few units of the Forza scooters in the Indian market in past few months, it was just a customer response gauging activity. The scooter is reported to officially arrive in India by late-2020. It will be introduced as a CKD product and the overall pricing will be kept around ₹2.50 lakh to ₹2.80 lakh (ex-showroom). The Forza 300 has no completion in the Indian market currently and when launched, it will be one of the costliest scooters in the country.