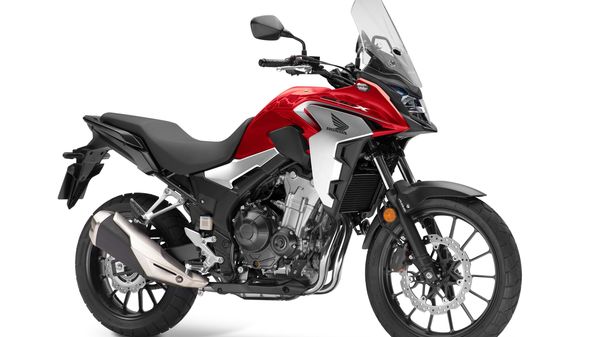 The Honda CB500X has been launched as a CKD (Completely Knocked Down) product in India.

Honda Motorcycle and Scooter India recently introduced the CB500X adventure touring motorcycle in the market. The bike has been launched as a CKD (Completely Knocked Down) product and has been priced at ₹6,87,386 (ex-showroom, Gurugram). At this price tag, it directly locks horns with other middleweight adventure bikes such as Kawasaki Versys 650 and the Suzuki V-Strom 650.

The Honda CB500X gets an 8-valve liquid-cooled parallel twin-cylinder engine which pumps out a maximum power of 35kw at 8500rpm and peak torque of 43.2Nm at 6500rpm. It comes with an Assist/Slipper Clutch and gets a 6-speed gearbox. It is the youngest member of the adventure bike family from Honda.

The company has also initiated bookings of the bike from Monday at its premium big bike dealerships – BigWing Topline & BigWing across India.

Kawasaki's dedicated middleweight adventure touring bike - Versys 650 is one of the most popular bikes of the segment. It retails at a price tag of ₹6,69,000 (Ex-Showroom) and features a 649 cc Liquid-cooled, 4-stroke Parallel Twin engine. The engine is capable of delivering 69 PS at 8,500 rpm and 64 Nm at 7,000 rpm. The transmission option includes a six-speed manual gearbox.

After a year of getting revealed at the Auto Expo, the bike was introduced in the market a few months back in the newest BS 6 iteration. Sadly, the BS 6 update also brought along a huge price hike which raised the pricing by as much as ₹1,37,423 in comparison to the previous BS 4 variant. It now costs ₹8,84,000 (ex-showroom Delhi). At the heart of the bike sits a 645cc DOHC 90-degree V-Twin motor which delivers 70.7PS of maximum power and 62Nm of peak torque.