Does Honda's latest CB500X have what it takes to woo the adventure enthusiasts of the country?Or is it just too little and too expensive for a market like ours?
By : Prashant Singh
| Updated on: 28 Mar 2021, 11:51 AM 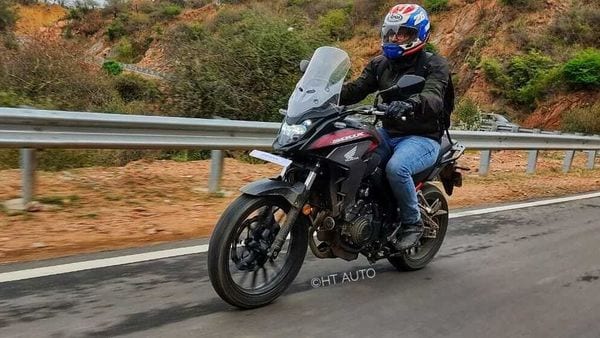 Globally, the Honda CB500X is pitted as a bike for new riders trying to enter the adventure space.

The Honda CB500X was first introduced internationally in 2013 to fill the void left by the big and bulky larger-displacement ADVs. Over the years, Honda's mid-sized adventurer has gone through several updates inside out, and recently India was blessed with its latest iteration. While globally it is pitted as a bike for new riders trying to enter the adventure space, in India, there are a bunch of other choices available before a rider upgrades to a bike like the CB500X.

So does Honda's latest CB500X have what it takes to woo the adventure enthusiasts of the country? Or is it just too little and too expensive? Read on to find out! 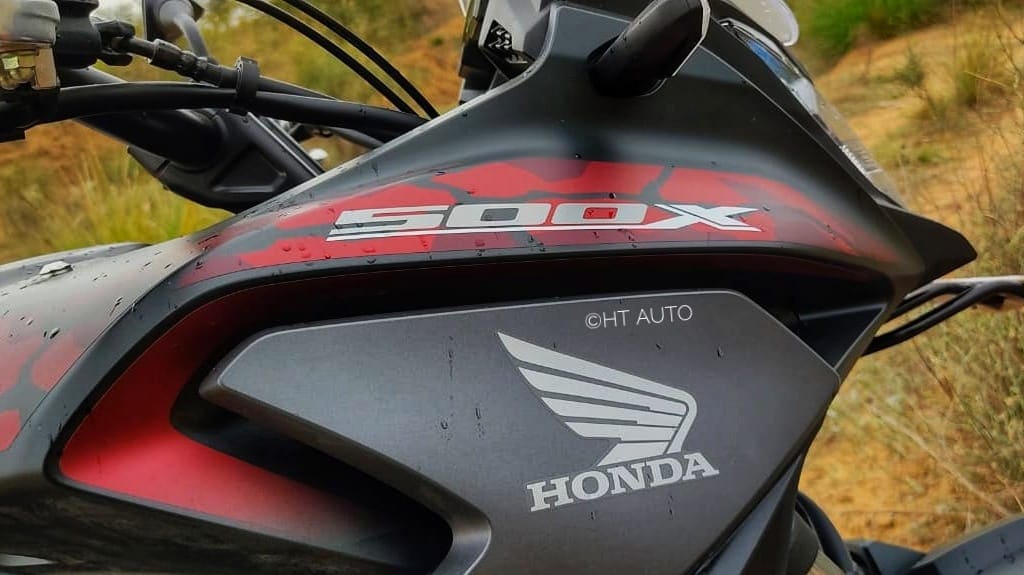 The front sleek and pointy snout, along with an all-LED headlamp gives the CB-X a very intimidating look. (Image Credits: HT Auto/Prashant Singh)

The CB500X looks sharp and ready for action from the word 'go'. The front sleek and pointy snout, along with an all-LED headlamp gives it a very intimidating look. The front light is capped with a mid-sized windshield which complements the front fascia, certifying its adventure credentials. Come to the sides and it is easy to notice how sleek the motorcycle appears to be, especially from the view from the saddle. The narrow tank is sculpted in a way to enable more grip when you stick your thighs to the sides.

While internationally it is available in three colour options - Grand Prix Red, Matt Gunpowder Black Metallic, and Pearl Metalloid White, India gets only the former two options. And I got a chance to play with the Matt Gunpowder Black Metallic (as seen in the test ride images). This colour option also gets a red graphic set extending from the front fairing to the tank. Also, the red dipped frame peeking out from the rear section of the bike also lends it a special touch of sportiness. Down below, the twin shiny exhaust pipes look clean, leading into a single stubby exhaust featuring a silver plate over a matt black finish, giving it a dual-tone effect. 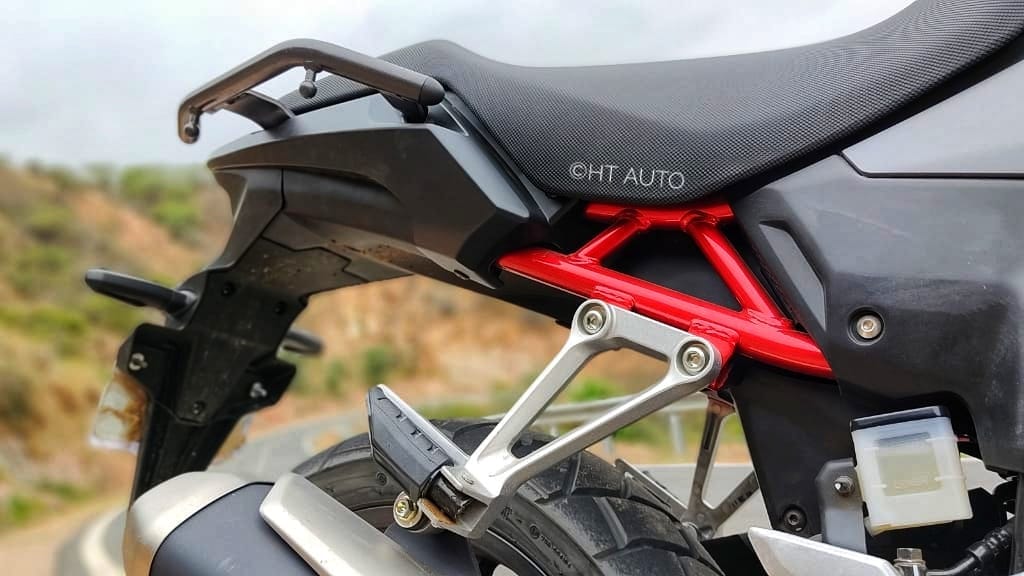 The red dipped frame peeking out from the rear section of the bike lends it a special touch of sportiness. (Image Credits: HT Auto/Prashant Singh)

The CB500X only gets alloy wheels, and spokes are currently not an option. Albeit, alloys don't look any less, spokes have a charm of their own, especially on a bike that claims to handle off-road duties. The tail light again is LED but the overall design remains basic. The rear section is pointy, as the front, thus complements its overall sharp and edgy body lines.

It gets a negative LCD display that provides a plethora of information such as the gear position, speed, clock, toggle menus, and a circular tachometer. The overall data is placed in a quite easy and readable format but the screen does get a little bit of glare in direct sunlight. 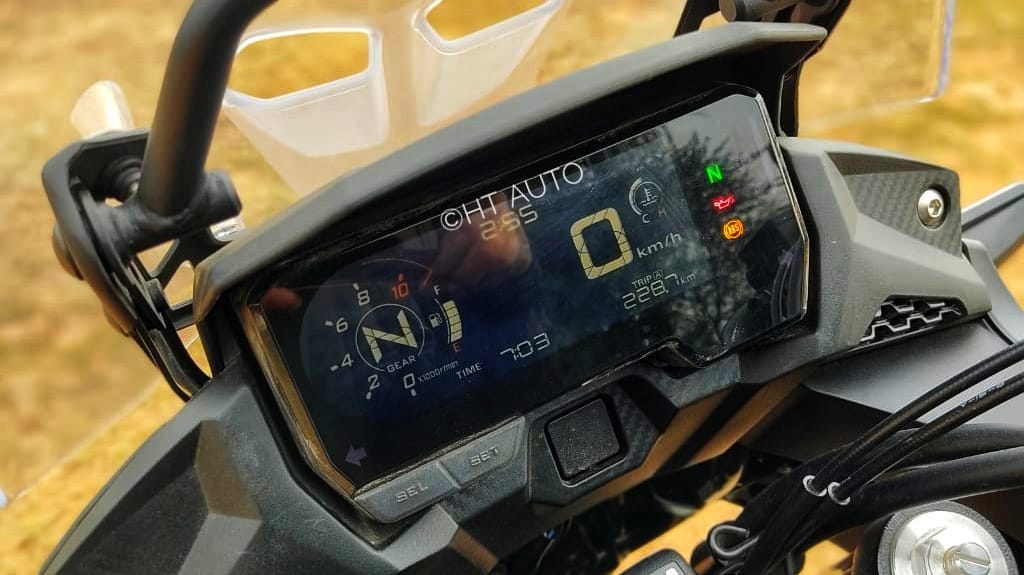 The Honda CB-X gets a negative LCD display that provides a plethora of information. (Image Credits: HT Auto/Prashant Singh)

At the heart of the CB-X sits a mild-mannered 471 cc parallel-twin engine which pumps out 42.45 hp of maximum power at 8,130 rpm and 29.25 pound-feet torque at 6,500 rpm. Twist the wrist and the first thing you'll notice is how friendly and docile the powertrain feels. Also, the clutch pull action is fairly easy and light thanks to the slipper assist function which makes riding in daily stop and go traffic a breezy affair.

The 471 cc might sound low on displacement, but mind you, the way the power is delivered from the word 'go' is spectacular. Though docile, the engine doesn't feel lacking power even when bustling down on wide-open highways. Vibrations are also very well contained, and only a faint buzz around the lower part of the seat can be felt when you hit around 8,000 rpm, but I am only nit-picking here. There is enough low-end torque to allow you to boost your way out of mud and slush with just a slight twist of the throttle and it's very predictable yet engaging. Also, the six-speed gearbox is slick shifting and moving up or down the gearbox is rewarding as the gear ratios are also perfectly aligned to keep you in the powerband, irrespective of the way you ride it. 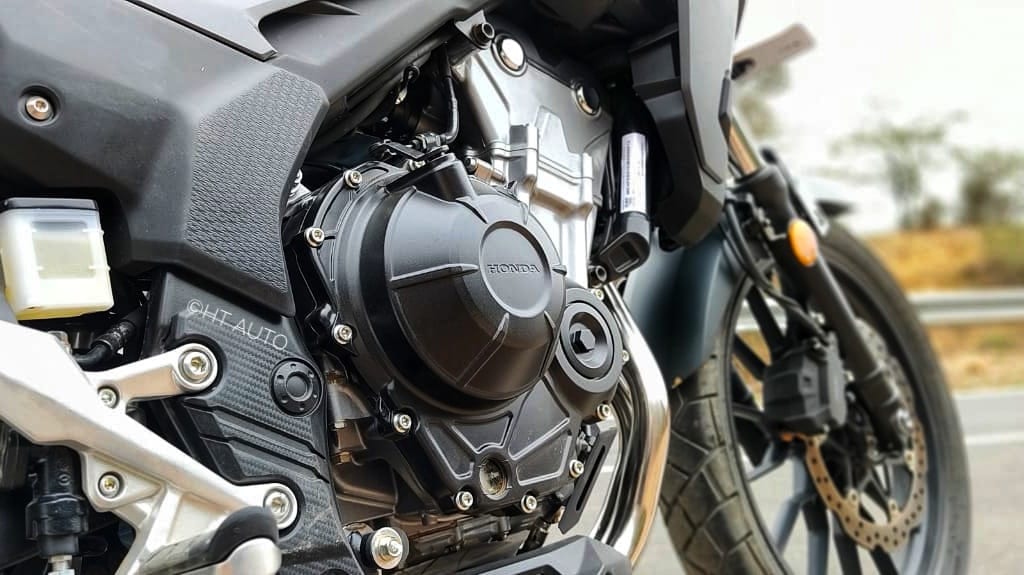 The front windscreen is offered with two-height adjustability settings but it does require tools and time. It serves the purpose well on city speeds, but sadly I couldn't take it on proper highways to see how properly it functions there.

The handlebar is perfectly positioned to make the rider feel at ease, but what's even better is the humble 830 mm seat height which fits right even for low height riders. Also, as I mentioned earlier, the narrow geometry around the tank as well as the front seat allows the rider to sit inside the bike, not at the top of it and that makes all the difference. Moving it in and out of parking space isn't a big deal and it gives an impression of being quite a manageable machine.

Tipping the scales at 197kg, it feels balanced on the tarmac and you can also feel free to hook it around a tight corner and you won't be disappointed. But, the 41mm telescopic fork and single-shock are tuned to be on the softer side, this just doesn't really help the bike to feel that it belongs on the switchbacks. Also, the mid-turn bumps have the rear pogoing on the undulations, causing instability. 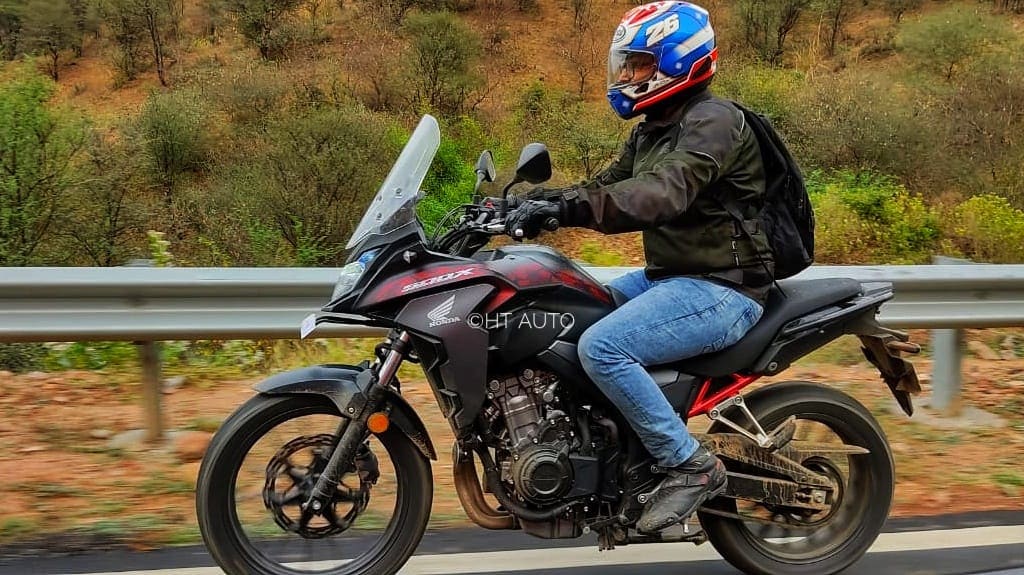 The combination of the softer suspension and 19-inch front wheel really makes the CB-X shine in dirt and off-road tracks. It soaks up all the bumps and jagged ruts without any fuss and thus all the blows are softened easily which is much needed on roads like ours. The combination of 19- and 17-inch cast aluminum rims shod with Dunlop Trailmax Mixtour tyres provide the CB-X an incredible dual-sport character which makes it a performer on both paved and dirt road conditions.

Standing up and riding on the CB-X is fun as the bar is rightly positioned as per my reach, also the footpegs are set to place feet comfortably. The seat feels very ergonomically designed for daily trips, but the comfort level on long trips remains untested for now. 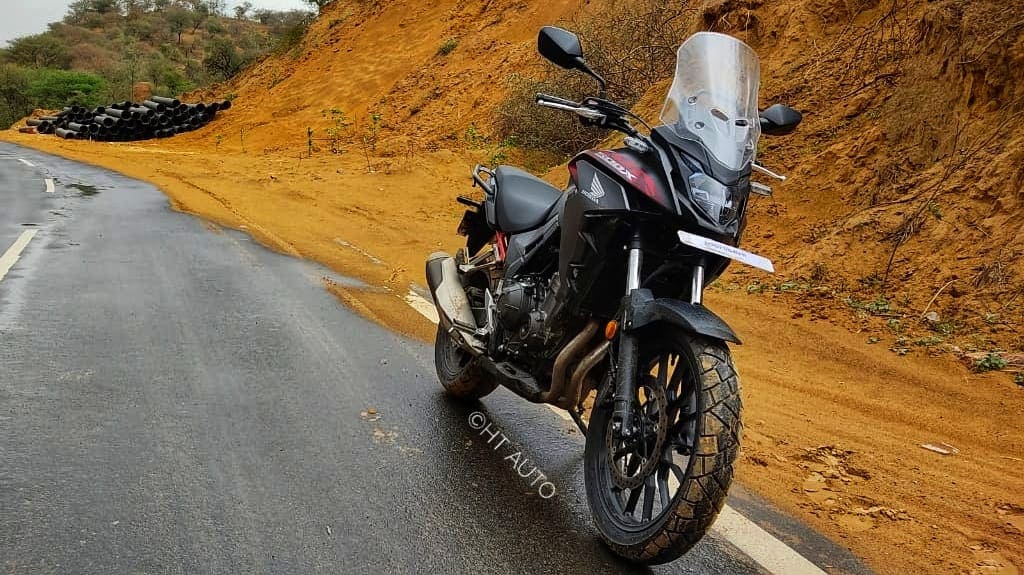 The Honda CB500X is a friendly and fun adventure motorcycle to have, especially if you are afraid of big and bulky ADVs. (Image Credits: HT Auto/Prashant Singh)

The Honda CB500X is indeed a friendly and fun adventure motorcycle to have, especially if you are afraid of big and bulky ADVs. It is quite a capable off-roader and not too intimidating at the same time. Also, unlike other bikes of the segment, it can be taken on your regular 9 to 5 commute and you'll be all smiles. The only downer is that it's seriously overpriced for India at ₹6.87 lakh (ex-showroom).