The new Hero Xpulse 200 4V has also been officially teased ahead of its introduction in the country.Expect the upcoming Xpulse 200 4V to cost slightly higher than the existing model.
By : HT Auto Desk
| Updated on: 06 Oct 2021, 05:04 PM 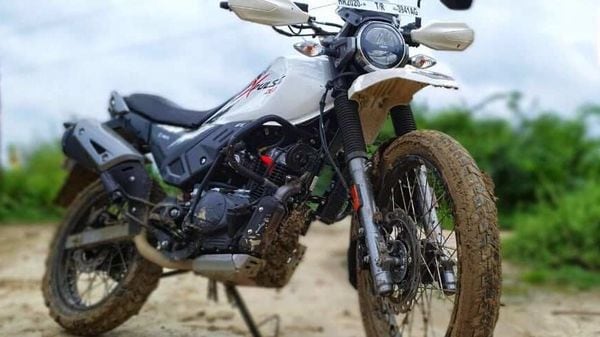 Hero MotoCorp is likely to announce the prices of the upcoming Xpulse 200 4V in the Indian market tomorrow. The bike has been spotted already during testing rounds on the public roads in India. The higher-spec model of the Xpulse 200 has also been officially teased ahead of its introduction in the country.

The upcoming iteration of the dual-purpose motorcycle will be the four-valve version of the already present Xpulse 200 that comes in a two-valve configuration.

(Also Read: Upcoming Hero bikes and scooters to launch in India around Diwali)

The previous teaser hi the blue and white front fender of the motorcycle which was also previewed in the spy shot images previously. The clips also revealed that the bike will use Hero’s Rally Kit with proper knobby tyres for a dedicated off-road experience.

At the heart of the upcoming bike will sit a new four-valve version of the current 199.6cc, oil-cooled motor. The use of a four-valve head is likely to improve the performance of the engine at high speeds. Needless to say, instead of the single inlet and outlet valve, the engine will use two inlet and two outlet valves for enhanced performance. The change in this structure is also likely to alter the output by a slight margin. For the record, the existing model produces 17.8bhp of maximum power and 16.45Nm of peak torque.