Ducati Streetfighter V4 to not arrive in India before 2021

The Ducati Streetfighter V4 was originally slated for 2020 launch but the date has now been pushed down to the next year due to a temporary pause in production.
By : Prashant Singh
| Updated on: 30 Apr 2020, 17:53 PM 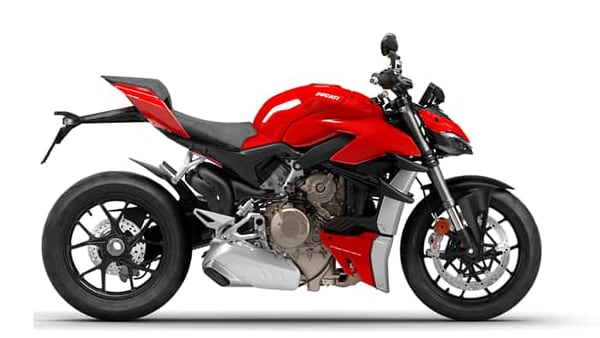 Ducati has pushed back the launch of the Streetfighter V4 in India to 2021. A company representative confirmed the news to HT Auto.

It's been quite a while since the motorcycle was revealed to the world in 2019. While it was originally slated to be launched in the ongoing year, the temporary suspension of manufacturing at Ducati's Italian production plant disrupted the firm's original plans. It was also recently reported that the Ducati's Borgo Panigale factory has swung back into action starting from April 27th. (Read full details here)

While it shares the powerplant with the Panigale V4, it gets a tweaked fuel and throttle maps, as well as a shorter final drive ratio which suits its wilder personality.

In terms of equipment kit, the standard Streetfighter V4 comes loaded with 43 mm Showa Big Piston Forks (BPF) featuring spring pre-load and compression/rebound damping adjustability. A Sachs steering damper is also part of the kit. The rear suspension duty is handled by a fully adjustable Sachs monoshock which comes mated to the engine with a forged aluminium bracket.

The fully kitted version of the bike, the Streetfighter V4 S gets even more premium equipment in the form of Ohlins NIX-30 front fork, Ohlins TTX36 rear shock and an Ohlins electronically controlled steering damper. This is a semi-active suspension.

The company has recently teased the arrival of Panigale V2 in India on its official Twitter handle. (Read full details here)