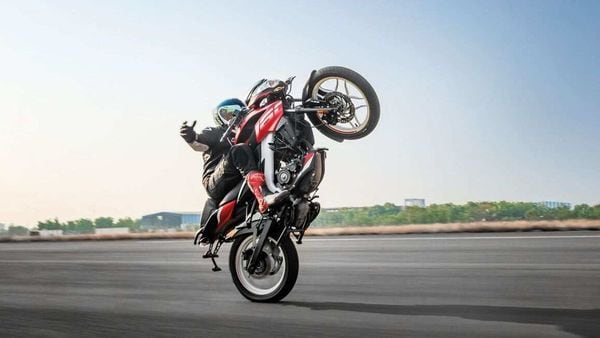 The feat was achieved by the road tester Hrushikesh Mandke on a Pulsar 160NS.

Bajaj Pulsar already has some sick stunt records under its belt, now the Pulsar NS160 has broken the world record for the longest no-hands wheelie and has entered the India Book of Records and Federation of Motor Sports Club of India (FMSCI).

The feat was achieved by the road tester Hrushikesh Mandke who completely devoured the previous record of 89 meters by executing a no-hands wheelie spanning 186.8 meters. The record was set in the presence of a senior representative from FMSCI and an adjudicator from the India Book of Records. Mandke had also recently set the record of the fastest quarter mile wheelie in 23.68 seconds riding a Pulsar NS200.

Commenting on successfully entering the record books on the Pulsar NS160, Hrushikesh Mandke said “The Pulsar 160 NS is the epitome of power and performance and it was the perfect choice for me to attempt this feat. The bike is light enough to manage a no hands wheelie, but at the same time a strong frame to deliver control, and of course powerful to easily initiate and maintain the wheelie. It is a proud moment for me be a part of another record-breaking event with the World’s Favorite Indian."

The Bajaj Pulsar bikes are highly popular among stunt riding enthusiasts in India. The NS160 is a smaller iteration of the NS 200 which gets a 160 cc DTS-I twin-spark fuel injected engine delivering 17.2 PS of power and a five-speed transmission.