Bajaj CT 110X arrives at dealerships ahead of official launch

The Bajaj CT 110X is expected to be launched in India in the next few weeks.The upcoming Bajaj bike will be slotted in the existing CT range of commuter bikes.
By : HT Auto Desk
| Written By : Prashant Singh
| Updated on: 13 Apr 2021, 17:42 PM 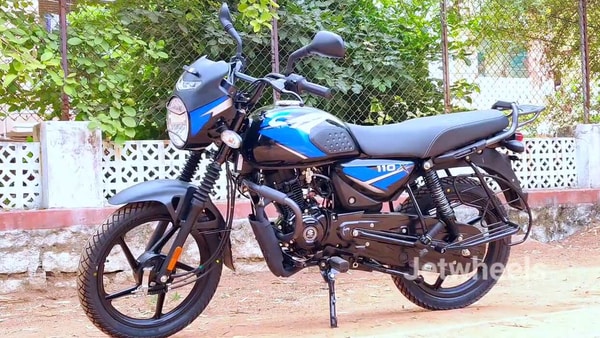 CT110X will be slotted in the existing CT range of commuter bikes from Bajaj Auto. Image Credits: YouTube/JetWheels

Bajaj Auto is gearing up to extend is portfolio with a number of new launches slated for the next few months. One of the upcoming Bajaj bikes will be the new CT 110X which has now been spotted ahead of its official launch in India. The new bike will be placed in the popular CT commuter range from Bajaj Auto, but will have its fair share of updates to make it distinctive from the rest of the lineup.

The spy image reveals that at the front it receives a round headlamp capped with a matte finished visor sporting an LED DRL for more visibility. In addition to that, there is a headlight grille which lends it a sturdier appeal. The fender on both the ends come dipped in black and there are front fork gaiters to protect the front fork from dust and dirt.

Over the sides there are new graphics on the fuel tank that also feature tank pads for thigh grips. Moreover, there are new decals used on the side panels. Also, there is a rear rack for carrying luggage and a bash plate has also been added to keep the engine protected. It rolls on five-spoke, 17-inch alloy wheels which have been shod with MRF rubbers.

The upcoming commuter bike gets a dual-clock instrument panel which displays information such as the current speed, fuel level, trip etc. In terms of mechanicals, there is a 115.45cc, single-cylinder, air-cooled engine which features electronic fuel injection. While there is no official technical specification sheet available, but expect this powertrain to develop about 9.41PS of maximum power and 8.45 Nm of peak torque. The transmission option will likely be a four-speed unit.