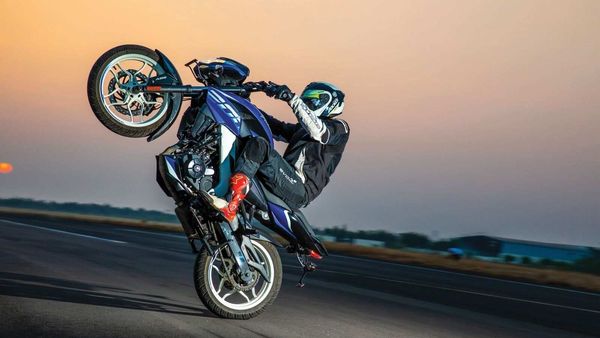 Bajaj Pulsar NS200 has created a new national record for the fastest quarter-mile wheelie in India. As Bajaj Auto claims, with road tester Hrushikesh Mandke on the saddle, the record was set in the presence of a senior representative from the Federation of Motor Sports Club of India (FMSCI) and an adjudicator from the India Book of Records. The Bajaj Pulsar NS200 completed the wheelie in 23.68 seconds.

The wheelie was attempted on an airport runway that was blocked-off for the record attempt. Bajaj Auto also claims that all the necessary safety protocols were laid down by some of the country’s finest and most experienced automotive journalists and road testers.

As Bajaj Auto further claims, the particular Bajaj Pulsar NS200 model used to set the record was in original showroom stock condition and a special waiver was requested for and obtained from the steward for removal of the number plates and the rear mudguard to avoid scrapping the tarmac during the wheelie.

Commenting on successfully performing the wheelie and setting the record with the Pulsar NS200, Hrushikesh Mandke said that he learnt to stunt on the first-generation Bajaj Pulsar, and delighted to perform the wheelie into the record books with the Pulsar NS200. "I have always trusted the Pulsar to deliver the performance and safety to enable extraordinary motorcycle stunts and it is fantastic that Indian stunt riders are now gunning for the record books, with made-in-India motorcycles," he further added.

The Bajaj Pulsar NS200 is powered by a 199.5 cc liquid-cooled, single-cylinder BS-VI compliant engine that is mated to a six-speed gearbox. The engine is capable of churning out 24.5 PS of maximum power with Bajaj Auto's patented triple-spark DTSi technology. The engine delivers 18.5 Nm of maximum torque. The bike is claimed to offer 35 kmpl of fuel efficiency.