Ather Energy, the Bengaluru-based electric scooter manufacturer, will launch its first showroom in Delhi on Friday.Ather began deliveries of its 450X electric scooters in Delhi in April this year.
By : HT Auto Desk
| Updated on: 01 Jul 2021, 12:14 PM 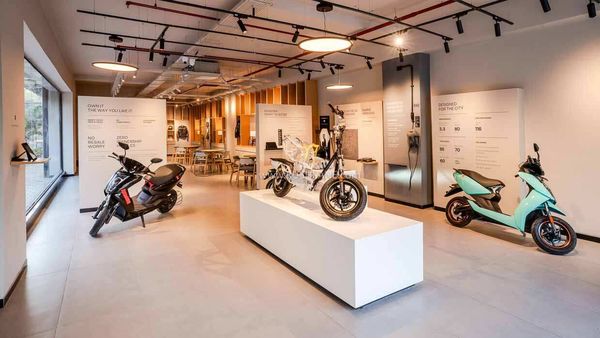 Ather Energy to set up its first Ather Space in Delhi at Lajpat Nagar. (File photo)

Ather Energy is all set to launch its first showroom in the national capital on Friday. The Bengaluru-based electric scooter manufacturer will set up its first Ather Space in Lajpat Nagar.

Ather Energy will showcase its flagship electric scooters, like Ather 450 and 450X, at the showroom. It is also expected to come with an EV charging section like it has in other places as well.

Ather Energy started to deliver its latest offering to India - the 450X electric scooter - in Delhi just three months ago. The deliveries were delayed in the national capital region.

It’s electric season in Dilli ⛅ and we’re just a day away from launching Dilli’s first ever Ather Space in Lajpat Nagar - see you soon! ⚡ pic.twitter.com/3BRAFefPeo

The Ather Space that will come up in Lajpat Nagar will be the company's third such premium outlet across the country. It was supposed to be launched in May this year. However, the plans got delayed due to the state lockdown due to second wave of the Covid-19 pandemic.

Ather Energy had previously announced a price cut of up to ₹14,500 on its Ather 450X and 450 Plus. While the company has rolled out the price list of the 450X Plus scooter in cities like Bengaluru, Chennai, Mumbai, Ahmedabad and Hyderabad, the revised price list for Delhi is yet to be formally announced.

With its entry in the national capital region, Ather Energy will hope to maximise its reach in the north Indian market too. Tarun Mehta, CEO and Co-founder of Ather Energy, had said, "Sales of electric two-wheelers have grown despite the pandemic and with this additional subsidy, we expect electric two-wheeler sales to disrupt the market, and clock 6 million+ units by 2025."

Ather Energy also hopes to expand distribution to 30 cities by the end of this year and, with the help of revised FAME II subsidies, try to accelerate consumer demand immensely.