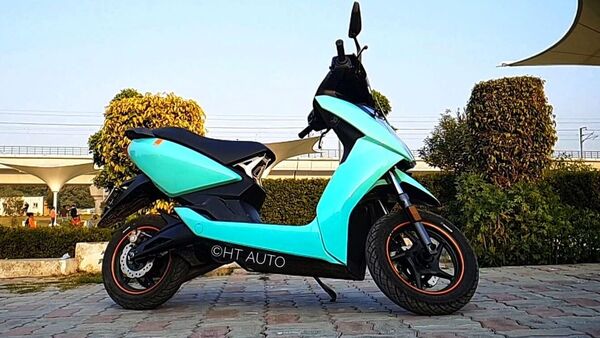 The Ather 450X has a compact dimension which helps it to squeeze into tight parking spots.

Ather Energy has recently announced that it has managed to record its highest-ever monthly sales of 3,787 units in the month of May'22. The company has managed to grow at a steady pace in the market. While the March'22 numbers stood at 2,591 units, April'22 recorded sales of 3,779 units of Ather's models. The company currently retails two models - 450X and 450 Plus in the Indian market. Both of these models have a decent demand in the Indian market and come out as one of the most technically advanced electric scooters present in India today. These also sport smart connected features along with various other functionalities.

Ather Energy has also recently announced the launch of the new TPMS (Tyre Pressure Monitoring System) for its 450X electric scooter. This feature is currently only restricted to high-end touring bikes and cars.

Other key developments from Ather in the last few months include its partnership with Magenta ChargeGrid which has been aimed at expanding the public charging network in the country. In addition, the EV maker has also widened its retail footprint in Kerala as it recently opened four new stores in the state.

Earlier this week, Ather Energy also issued a congratulatory message to Gujarat Titans after the franchise won the Indian Premier League or IPL 2022 trophy in its debut season. The Hardik Pandya-led franchise topped the points table before going on to defeat Rajasthan Royals in the qualifier as well as in the final to lift the crown.