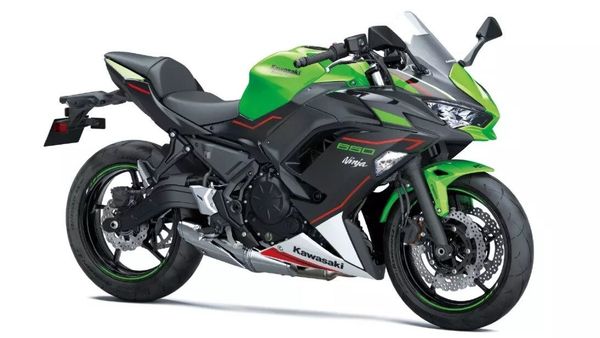 Save for the colour scheme updates, the rest of the Kawasaki Ninja 650 remains unchanged.

2022 Kawasaki Ninja 650 has been launched in the Indian market at a price tag of ₹6.61 lakh (ex-showroom). In comparison to the model it replaces, the latest MY2022 Ninja 650 has become expensive by ₹7,000. With the model year update, the bike has received new colour options.

As part of the new update, the bike has gained an updated signature Lime Green paintwork that now gets white hints on the lower fairing and red pinstripe graphics but does away with the yellow honeycomb pattern found previously.

In addition to that, it also features the Pearl Robotic White colour scheme with metallic grey and lime green highlights. Save for these updates, the rest of the motorcycle remains unchanged. There is also a KRT edition of the bike available in the international markets. This edition is offered in Lime Green/Ebony/Pearl Blizzard White paint scheme.

The motorcycle carries forward its full-LED headlamp and tail lamp. Its 4.3-inch full-colour TFT display is compatible with Bluetooth connectivity.

At the heart of the motorcycle sits a 649cc, parallel-twin, liquid-cooled engine that is shared with the Z650 streetfighter motorcycle. The engine comes paired to a six-speed gearbox with a slipper clutch function.

The suspension duties on the motorcycle are handled by telescopic front forks and a rear monoshock. For braking, the bike features twin discs at the front and a single disc at the rear with dual-channel ABS.

The new Ninja 650 broke cover earlier this year in June.