The Honda Monkey was originally launched in 1970, and the latest model continues to boast the same fun and joyful exterior design of the original bike.2022 Monkey bike from Honda has been given a new Euro 5 engine as part of the yearly update.
By : HT Auto Desk
| Written By : Prashant Singh
| Updated on: 22 Jun 2021, 10:05 AM 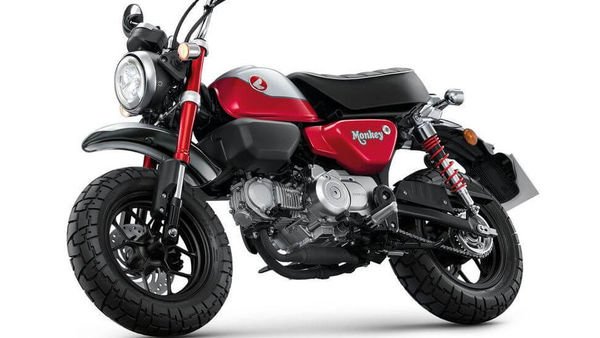 Honda has unveiled the new 2022 Monkey bike for the global markets. Apart from minor changes here and there, the new Monkey has been given a new Euro 5-compliant engine as part of the yearly update.

While the overall output of the new Monkey remains unchanged, its engine has been given improvements such as a higher compression ratio, a new airbox, and intake for improved airflow. These changes are done to achieve compliance with the stringent Euro 5 norms. With all the new updates, the powertrain continues to supply 9.2 bhp of maximum power that is now available at 6,750 rpm and a peak torque of 11 Nm that comes at 5,500 rpm. The engine also gets advanced internals with low-friction coatings, offset cylinder and roller-rocker valve gear.

(Also Read: Honda recalls over 28,500 bikes in the US over this issue)

The transmission on the new Monkey has gained additional gear and it now gets a five-speed gearbox. Other updates on the car include a tweaked suspension, with the rear shocks getting two-stage springs and revised damper rubbers. Thanks to the updated setup, the motorcycle now has a ground clearance of 175 mm.

Some of the key exterior features of the new Monkey include full LED lighting along with the indicators and an LCD instrument console. It continues to sport the same chromed high-rise handlebars and frame, swingarm, body-coloured shock absorbers, single-seat, and a peanut-shaped fuel tank as before.

The Monkey has also become lighter as the weight has dropped from 107 kg to 104 kg. It also continues to feature the same ABS safety kit with an inertial measurement unit (IMU). What's new is the 'answer back' feature on the bike that makes the lights flash at the push of a button.

The Honda Monkey was originally launched in 1970 and the new model still continues to boast the same fun and joyful character as the original bike. Sadly, it won't be made available in India anytime soon.