The new Ducati SuperSport 950 in true sense is an everyday sportbike. It is practical, good looking and absolute hoot to ride.
By : Prashant Singh
| Updated on: 23 Jun 2022, 17:50 PM

With the latest update, the Ducati SuperSport has become an even more good-looking motorcycle, courtesy its V4 inspired LED headlamps.

Ducati SuperSport has been around for quite sometime now, and the burgeoning trend of sport tourers now makes its presence even more relevant. Updated sometime back, the SuperSport 950 received a mid-cycle facelift that brought along some tasty updates to give the bike a refreshed appeal. Only recently I got a chance to swing my leg over the new model to see if it has become any better with the latest update or not?

Not just the front, but the SuperSport has also received an updated side body fairing with narrower gaps when compared against the previous model. (HT Auto)

The SuperSport 950 has always been a smart bike to look at, but the use of new LED headlamp with clear cut inspiration from the Panigale V4 makes it even better and mature to look at. In addition, there is also a new windscreen upfront with more streamlined and dynamic line for more style and substance. Not just the front, the SuperSport has also received an updated side body fairing with narrower gaps when compared against the previous model. 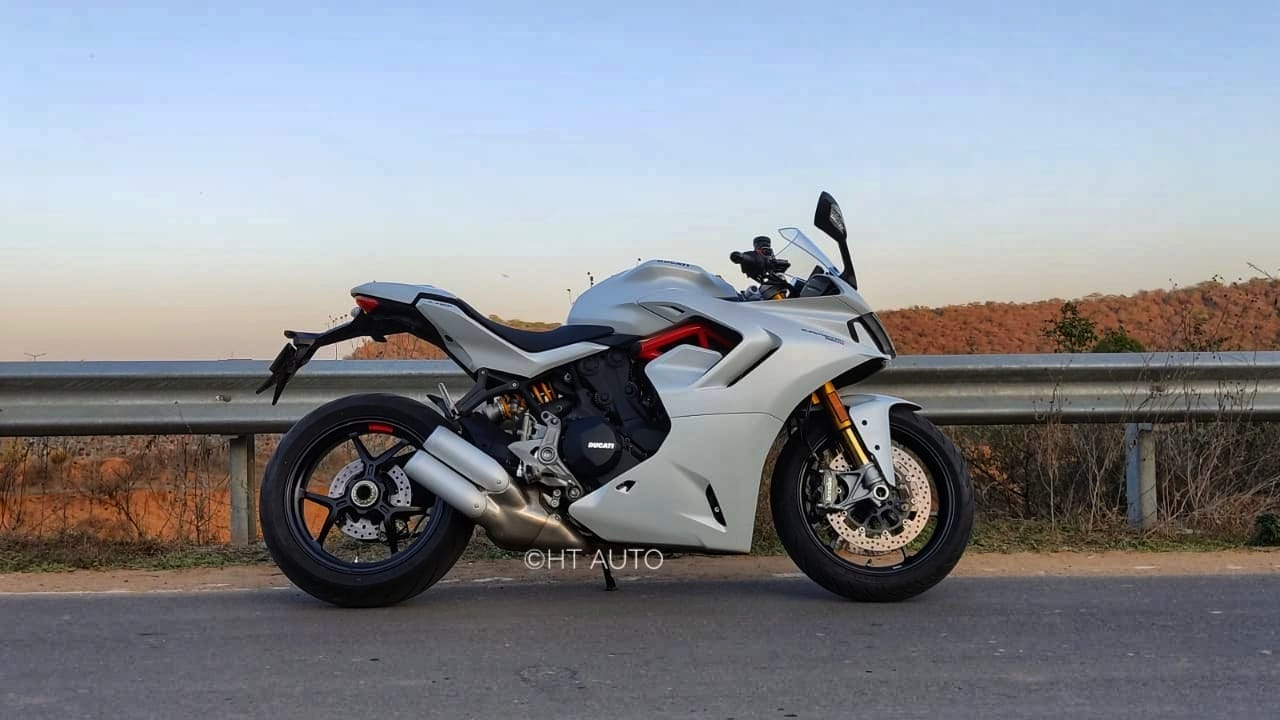 Test unit being the higher-spec S version gets the Arctic White Silk fairing with Ducati Red frame, which is exclusive to the this trim. (HT Auto)

While there are some notable refreshed exterior elements, the overall look and feel of the SuperSport remains unchanged, and I quite like it. While the muscular fuel tank appears to be quite wide from the saddle view, it remains narrow to properly get a grip and tuck in your thighs for support. There's also enough room on the saddle to properly move around and position your self for the best comfort stance. The handle-bar position, as seen before, remains a tad committed, but nothing that would kill you on an everyday ride.

Tap the starter on and the 937cc Testastretta L-twin breathes to life in an instant with a loud and throaty exhaust note. Even in stock form, the sound turned on safety alarm of the cars parked nearby in an underground parking, what's not to like about it?

Roll on the throttle and this powertrain's punchy low-down torque will keep you engaged even on city roads. The 110 hp/93 Nm of output remains nearly unchanged with the latest update. Against the Panigale V2 and other high-revving models, this engine feels more raw, reminding of the classic Ducatis. Also you wouldn't need to abuse the throttle to squeeze out a good acceleration out of it as it is happy to go fast or wheelie, irrespective for where you are cruising in the rev range. So much instant power almost everywhere! The higher ‘S’ -spec trim also gets a standard Ducati Quick Shift (DQS) up/down EVO which works like a charm especially when shifting up. Just pin the throttle down and keep shifting up and you'll fly away like a rocket without the use of its clutch which anyways isn't heavy to use. The 6-speed transmission is again super slick.

However, there are vibrations somewhere around later end of the rev band, and that becomes evident as panels start to shudder a bit when cruising at high speeds. Also, rear view mirrors start to vibrate to a level of infuriation as they become unusable. 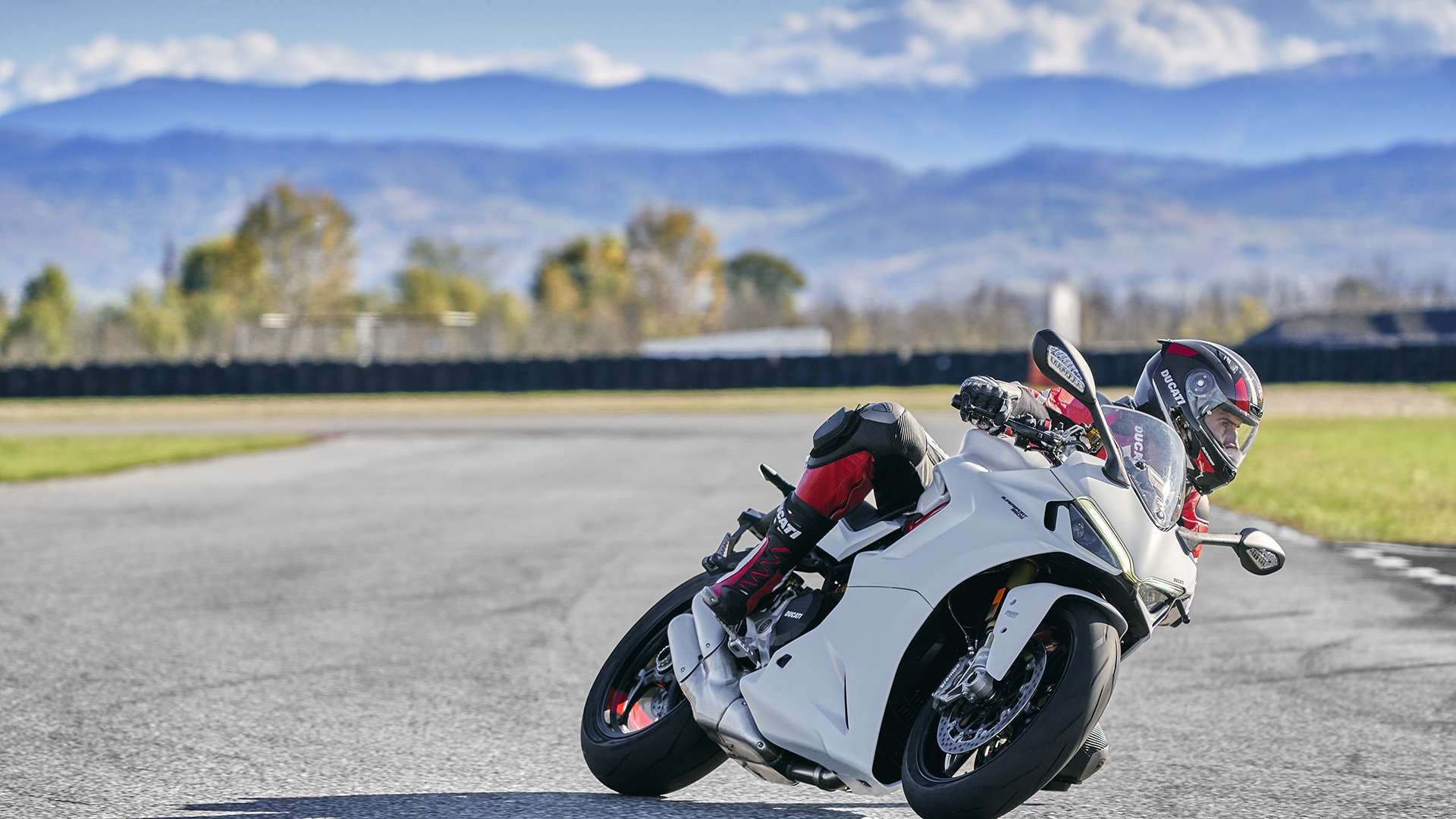 Against the Panigale V2 and other high-revving models, the engine on the SuperSport 950 feels more raw, reminding of the classic Ducatis. (Ducati)

SuperSport continues to host a range of features including electronics based on Bosch's 6-axis inertial platform capable of instantly detecting the bike's roll, yaw, and pitch angles in space. There's Bosch Cornering ABS, Ducati Traction Control (DTC) EVO, and Ducati Wheelie Control (DWC) EVO and all of this makes the SuperSport a truly modern bike. Well of course, if you don't want so much intrusion from the electronics, you can dial it down to minimum using the toggle switches added to the left side of the handlebar. Well so many buttons/switches may look confusing at first, but I promise going through the menu and selecting it is easy, and can also be done on the go. Not to forget, there is also a new full-TFT colour dashboard that hosts all the required information in a simple and uncluttered manner. 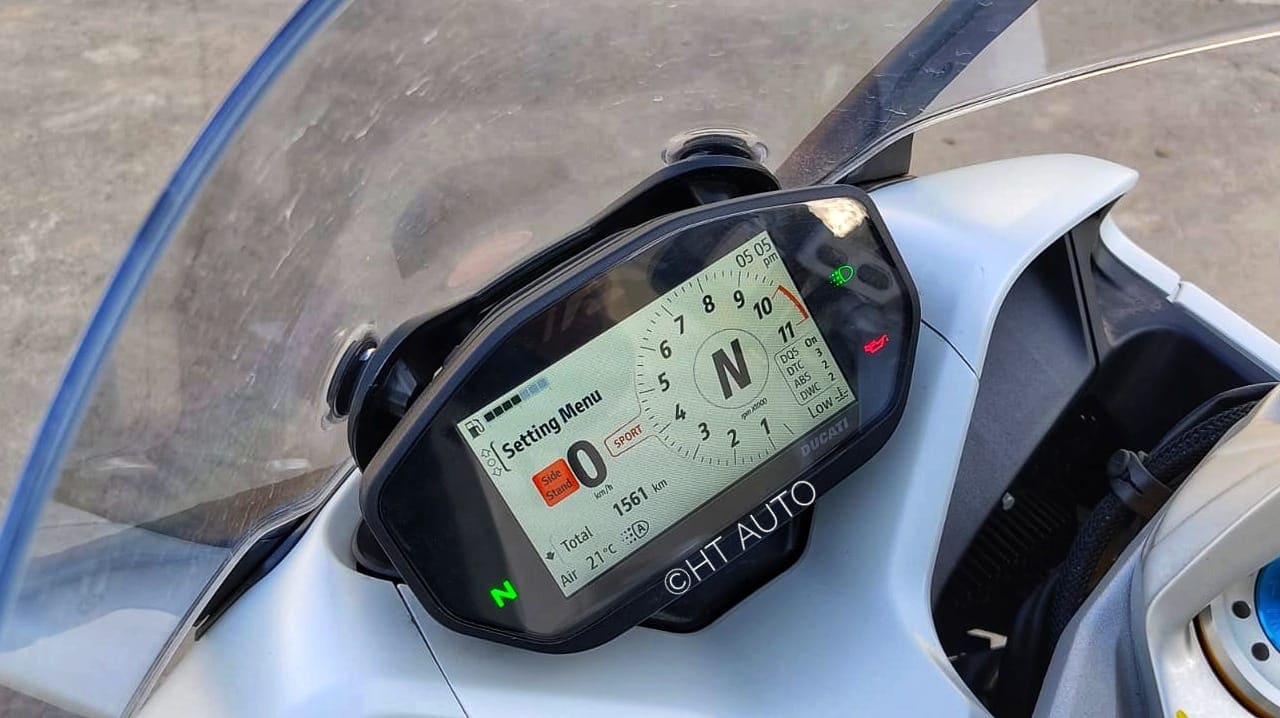 SuperSport 950 gets a new full-TFT colour dashboard that hosts all the required information in a simple and uncluttered manner. (HT Auto)

I remember doing my first knee-down on public roads on the original SuperSport back in 2018 and riding the bike again evoked positive nostalgia. The lighter front-end make the SuperSport an agile handler and with the higher-spec Öhlins suspension, the SuperSport becomes a proper everyday sportbike that anyone can ride. Ohlins used on the SuperSport S are well-calibrated to be used on the public roads. Turn after turn, maneuvering the SuperSport is easy, fun and not demanding at all. The suspension also deals with all the undulations thrown by regular public roads and also, sticky Pirelli rubber aids in keeping the grip on, even on negatively banked roads. 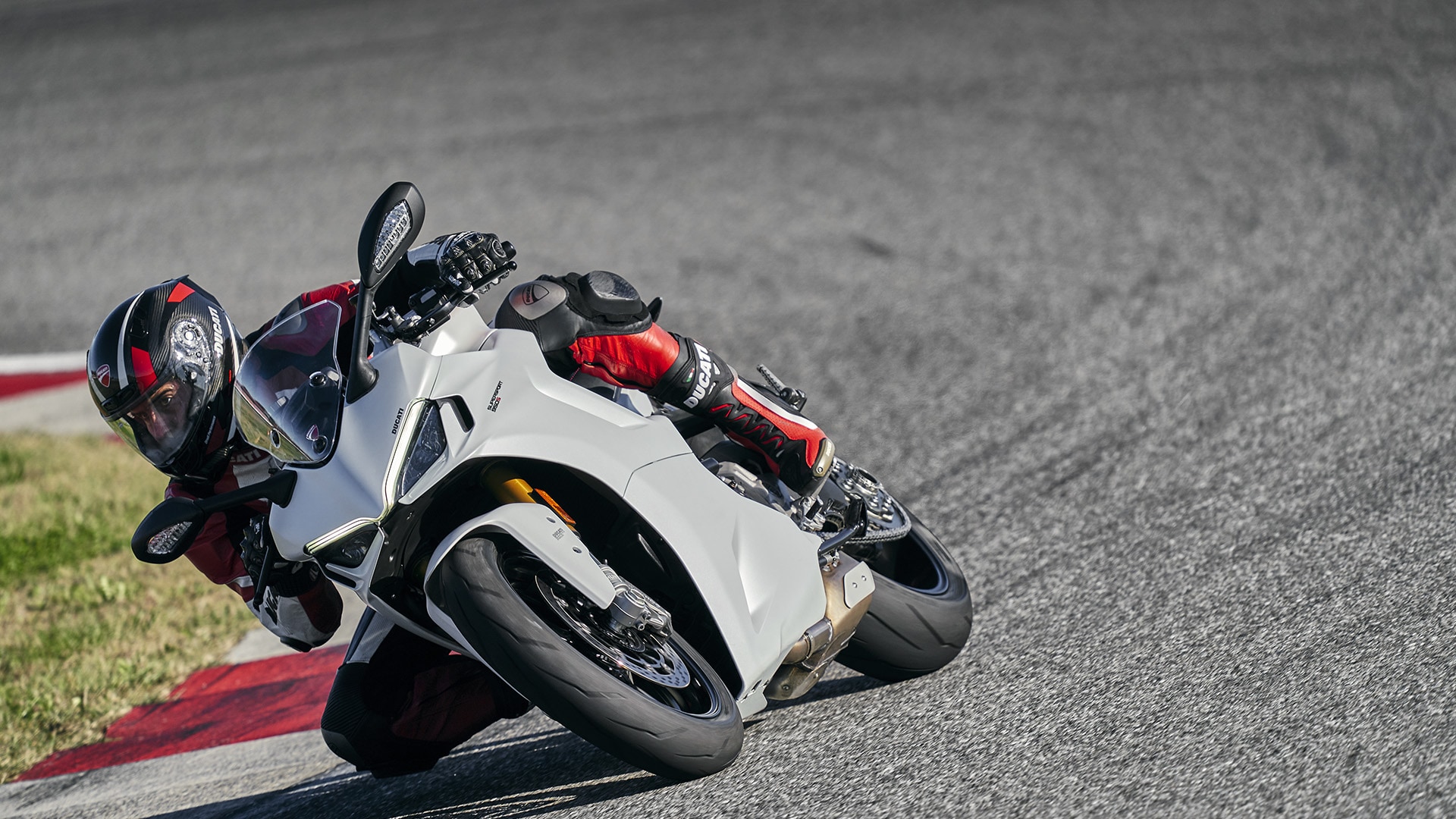 Lighter front-end make the SuperSport an agile handler and with the higher-spec Öhlins suspension, it becomes a proper everyday sportbike that anyone can ride. (Ducati)

Remastered side fairing has also changed the air flow from the cooling system on the bike, and I sincerely thank the Ducati engineers for this. While previously all the hot air was deviated right bang on rider's thighs, the new bike felt a bit better. And more manageable as per the Indian weather conditions.

Ducati SuperSport features a mildly aggressive riding stance, something you'd expect from a sport touring machine. The clip-ons are mid-set allowing the rider to bend a bit forward, while the foot pegs are also pushed a lil backward, and everything comes together to deliver a mild sporty stance. This serves as a good balance between practicality and fun, which is the moto for SuperSport. 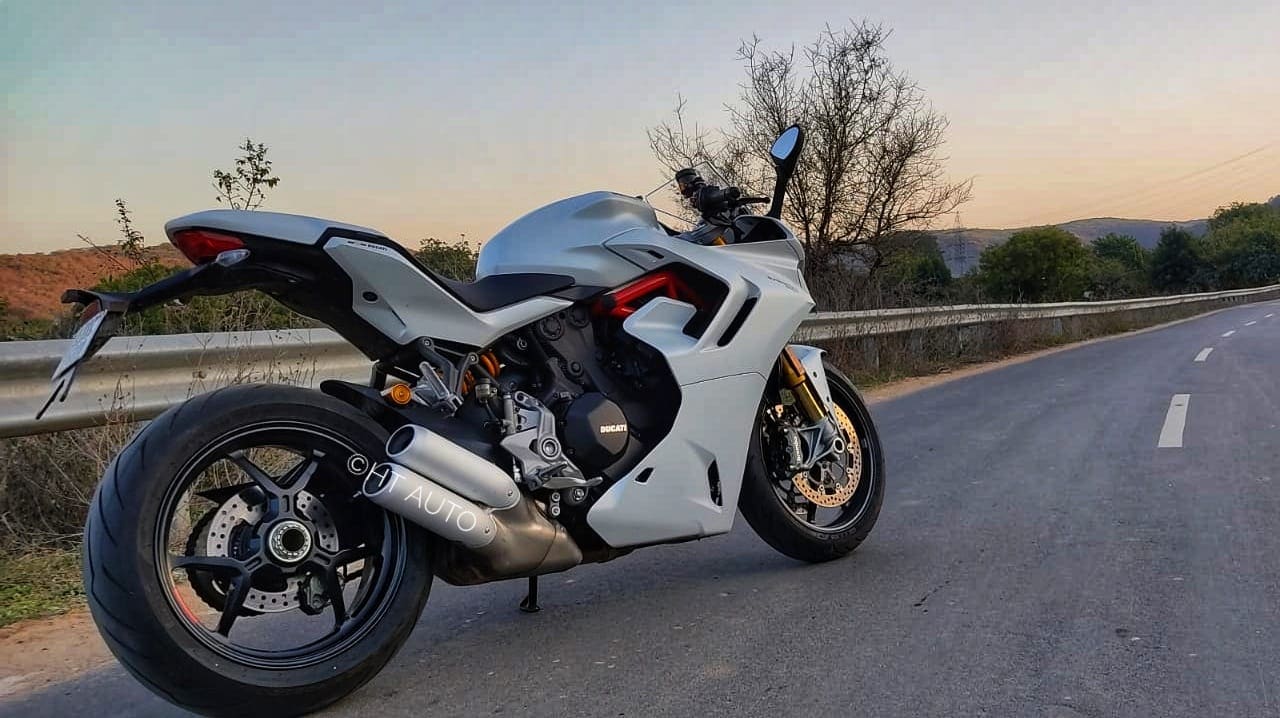 Remastered side fairing has also changed the air flow from the cooling system on the bike. (HT Auto)

Ducati SuperSport 950 in true sense is an everyday sportbike. It is practical, good looking and absolute hoot to ride. Starting at ₹14.31 lakh (ex-showroom), the SuperSport 950 isn't exactly the most affordable offering, but it sure is in a league of it own.