The track-only Kawasaki Ninja H2R has been priced at ₹79.90 lakh (ex-showroom, Delhi).There is no direct rival to the Ninja H2R in the Indian market currently.With the latest yearly update, the bike has carried forward the same exterior styling as last year's model.
By : HT Auto Desk
| Updated on: 04 Jun 2021, 04:50 PM 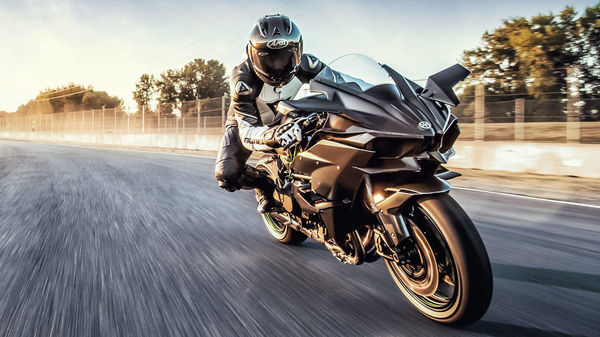 The track-only Ninja H2R motorcycle has been priced at ₹79.90 lakh (ex-showroom, Delhi).

With the latest yearly update, the bike has carried forward the same exterior styling as last year's model. It continues to sport its key exterior features such as aerodynamic winglets, rider-only saddle, and a single-sided swingarm. Also, the Mirror Coated Matte Spark Black paint scheme is similar to the previous bike.

It sources power from a 998cc, inline four-cylinder, liquid-cooled engine and there is also a supercharger that complements the engine performance. The whole setup is rated to develop 305.7bhp (321.8bhp with RAM Air) at 14,000rpm and 165Nm of peak torque at 12,500rpm. It comes paired with a six-speed gearbox. It also gets a slipper and an assist clutch mechanism along with a bidirectional quickshifter.

The hardware kit on the motorcycle includes 43mm upside-down forks at the front and an Ohlins TTX36 gas-charged rear mono-shock. The braking duties are performed by dual 330mm discs at the front and a single 250mm rotor at the rear. It also gets an Ohlins electronic steering damper as part of its performance kit. The bike tips the scales at 216kg (kerb).

One of the main electronic highlights of the bike include a Bosch-sourced Inertial Measurement Unit (IMU) with Kawasaki Cornering Management Function.

There is no direct rival to the bike in the Indian market currently.