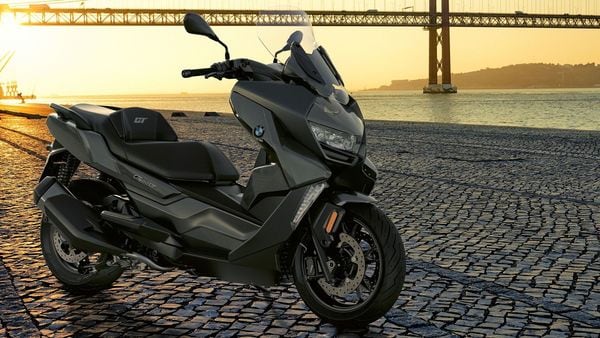 BMW Motorrad India has teased the upcoming C 400 GT maxi-scooter once again ahead of its official debut in the country. Pre-launch bookings for BMW's new offering have also commenced at the select BMW Motorrad dealerships in India. Interested customers can get the scooter booked at a token amount of ₹1 lakh. The company is likely to announce the price of the scooter in the next few days in India.

For the record, the BMW C 400 GT maxi-scooter is already on sale in some international markets. At the heart of the two-wheeler sits a 350 cc single-cylinder, liquid-cooled engine that pumps out 33.5 bhp of maximum power at 7,500 rpm and a peak torque output of 35 Nm at 5,750 rpm. The engine comes paired to a CVT gearbox.

For 2021, the BMW's premium maxi-scooter has been updated with revamped clutch springs for a smoother response from the transmission. It is capable of attaining a top speed of 139 kmph.

Other key mechanical and feature updates on the scooter, apart from revamped clutch springs include a new 'e-gas' system which is nothing but a kind of throttle-by-wire system. Its other key updates include updated engine management as well as a new exhaust system.

The updated powertrain is now compliant with Euro 5/BS 6 norms. In order to attain this form, the scooter has received a new catalytic converter, a new oxygen sensor as well as a modified cylinder head.

The company has also added new safety features in the form of a revised Automatic Stability Control (ASC) for additional grip and stability at the rear end on low-traction surfaces.

When launched, expect the two-wheeler to be priced somewhere in the range of ₹5 lakh to ₹6 lakh (ex-showroom). It doesn't have any direct rivals in the Indian market currently.