From Escort, Ikon to Figo, Freestyle: Ford’s India journey at a glance

Ford had launched Ikon sedan as its first independent product in India back in 1999. It went on to launch as many as 12 products, including the popular Figo hatchback, EcoSport and Endeavour SUVs. Ford Freestyle is the last model to be made in India.
By : HT Auto Desk
| Updated on: 09 Sep 2021, 18:00 PM 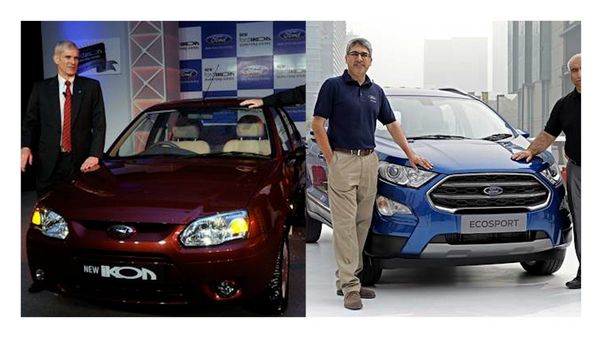 Ford Ikon (left) and Ford EcoSport (right) are two among the 12 models the US-based carmaker brought to India since 1995.

Ford Motor Company has decided to stop making cars in India from now on. In a decision taken on Thursday, the carmaker has announced that it will shut down its manufacturing facilities in Gujarat and Tamil Nadu. The decision means the end of the road for many popular products in the Indian markets, including the sub-compact SUV EcoSport or the bulky Endeavour SUV.

Ford will stop selling new cars made in India after its existing inventory of vehicles are completely sold out. Ford has assured that it will support its existing customer base in India. The company has said that it will continue to offer after-sales service, aftermarket parts and warranty coverage.

Ford Motor's journey in India began in the 1920's when it came to the country as a subsidiary of Ford Motor Company of Canada, before exiting in the early 50's. In 1995, Ford returned to India, this time in collaboration with Indian vehicle manufacturer Mahindra and Mahindra. The two set up a joint venture called Mahindra Ford India Limited, and produced their first product - Ford Escort - in 1996. The Escort was primarily an European model which was manufactured for Indian customers first. It later gave way to Ford's first independent model for India - Ikon subcompact sedan.

Ford and Mahindra had severed ties in between, and Ford became Ford Motor India Limited in 1998. Ford Ikon happened to India a year later. It was based on the fourth generation of the Ford Fiesta hatchback. Ikon was later discontinued in 2011.

Ford went on to launch several more products in India, mainly during the first 15 years of the century. The popular Figo hatchback was first launched in India back in 2010. The model has undergone facelifts and is now in its second generation which was launched only five years ago.

Ford EcoSport subcompact SUV, one of the best-selling vehicles from the US-based carmaker in India, was first launched in 2013. The carmaker has been spotted testing in what is believed to be a new facelift version of the EcoSport SUV recently. However, it will not see daylight in India after Ford's decision to shut down its plants.

Ford Endeavour is another SUV from the carmaker that has been quite popular, despite being in a niche segment of large SUVs like Toyota Fortuner. Priced at more than ₹33 lakh, Endeavour was among the firsts of the big and bulky SUVs to enter the market in 2003. The second generation of the model had hit the market in 2015.

Ford also tried its hand in the subcompact sedan segment with Figo Aspire, after it decided to discontinue with Ikon. Figo Aspire was launched in 2015, but it did not match up with rivals like Maruti Suzuki Dzire, Honda Amaze or Hyundai Xcent.

The last model launched by Ford in India is the Freestyle. Ford pitched it as a lifestyle adventure vehicle, slotting it somewhere between the Figo hatchback and the EcoSport SUV.

Ford currently sells Endeavour, EcoSport, Figo, Figo Aspire and Freestyle models in India. Ford has so far discontinued seven models, including the Mustang which was brought in 2015.