Tesla in trouble, may have falsely advertised Autopilot

Tesla believes Autopilot is the future of cars but may have exaggerated the capabilities of the system deployed on its EVs.
By : HT Auto Desk
| Updated on: 06 Aug 2022, 12:07 PM 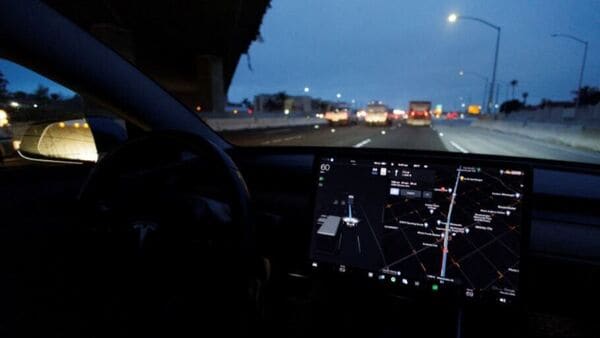 File photo of the Tesla Autopilot system in action inside a Tesla electric vehicle. (Used for representational purpose )

The state transportation regulator in California has accused Tesla of falsely advertising its Autopilot and Full Self-Driving features as providing autonomous vehicle control. California's Department of Motor Vehicles (DMV) stated in a complaint that Tesla misled prospective buyers with an advertisement that exaggerated how well its advanced driver assistance systems (ADAS) worked.

DMV's complaint said Tesla made statements regarding its ADAS which are untrue. “Tesla made or disseminated statements that are untrue or misleading, and not based on facts," stated the complaint. When these statements were made by Tesla, the EV company's electric vehicles featuring Autopilot and Full Self-Driving technology were in operating status at the time and even now don't as autonomous vehicles, added the department's grievance further.

(Also read | Elon Musk all set to announce yet another Tesla factory, targets over a dozen )

According to a Reuters report, the DMV is looking for remedies that could include suspending Tesla's license to sell its EVs in California along with pushing the company to make restitution to drivers.

Since 2016, the National Highway Traffic Safety Administration (NHTSA) has registered 38 special investigations of crashes that involved Tesla's electric cars. It was suspected that when these accidents took place, the ADAS systems of the EVs were in use. Nineteen deaths have been reported from those crashes. This also includes a motorcyclist who was killed in Utah last month.

Earlier, Tesla had stated its Autopilot feature can let a user steer, accelerate and brake automatically within its lane while the Full-Self Driving feature will equip the electric vehicles to change their lanes and obey traffic signals. Tesla had clarified in the past that even after activating these features, it is imperative that the driver stay fully alert and has his or her hands on the steering wheel.