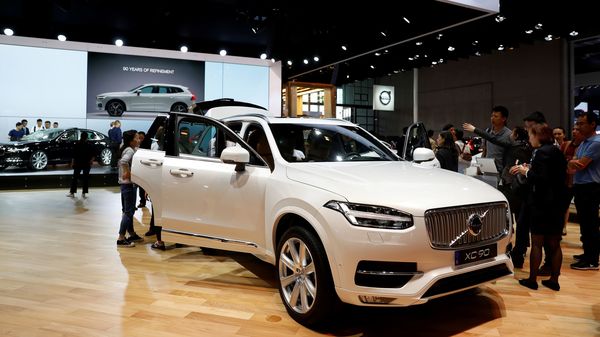 Visitors look at a Volvo XC90 at the Shanghai Auto Show in China in 2017. (File Photo)

When we talk about electrification and other new automotive technology development, Volvo is one car brand that is silently making progress in those domains. The Swedish luxury carmaker is now readying its next-generation XC90 flagship SUV, which will come with loads of changes and new technologies on board as compared to the outgoing XC90.

New Volvo flagship SUV is unlikely to be badged as XC90. Instead, its name will start with a vowel, as indicated by Volvo Cars CEO Hakan Samuelsson in an interview with Automotive News. Interestingly, earlier this year in October, Volvo filed a trademark application seeking a nomenclature Embla, which was the only trademark name starting with a vowel from the brand filed in the last four years. Connecting the dots, the new flagship SUV from Volvo might come bearing that moniker.

Embla is the name of the first female in Norse mythology. After reading this, if you want to be more conclusive about the upcoming luxury SUV being named Volvo Embla, another hint is that it is going to be the first dedicated electric vehicle from the Swedish brand.

As Volvo CEO said in the interview, the new car will be born electric. “So there will be none of the compromises that come when you make a combustion car an EV," Samuelsson told. “That means we don't have to worry about where the engine and exhaust system will go. This car will have a flat floor and roomy interior. It will be the perfect family car in Europe and the US, where the current XC90 is very popular today," he further added.

Describing the car further, he also said that this luxury SUV will offer the driver a high seating position, good visibility as well. Expect it to come with a host of advanced safety systems. Also, it is unlikely to share the electric powertrain with Polestar 3, despite sharing the same underpinning. Expect the Volvo Embla to make its debut sometime in 2022.