Skoda Slavia sedan set to launch in March next year

Skoda unveiled the Slavia sedan earlier in November. Skoda Slavia price will be revealed early next year when the carmaker formally launches the model in India.
By : HT Auto Desk
| Updated on: 25 Dec 2021, 11:51 AM 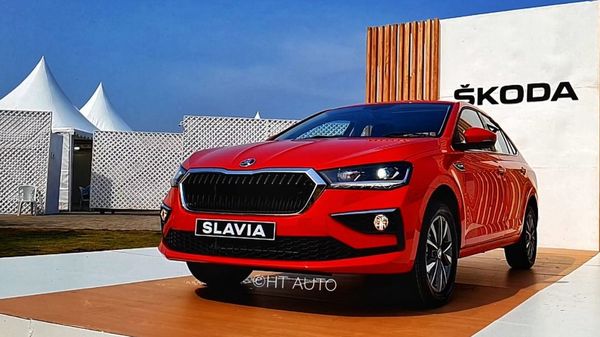 Skoda has confirmed that the launch of its new sedan Slavia will take place in March next year. Skoda Slavia is set to replace the Rapid, which is unlikely to make a comeback to the Indian market with a facelift. Slavia will add to Skoda's premium sedan line-up which also includes Octavia and Superb.

Skoda had unveiled the Slavia in November this year. It will take on Honda City, Hyundai Verna, Maruti Suzuki Ciaz among others in the midsize sedan segment when launched. Skoda Slavia price is expected to range between ₹10 lakh and ₹17 lakh (ex-showroom).

Based on the Czech carmaker's MQB A0 IN platform, Skoda Slavia stands 4,541 mm in length, 1,752 mm in width, and 1,487 mm in height. Compared to the Skoda Rapid, all-new Slavia comes 128 mm longer, 53 mm wider, and 21 mm taller. Skoda Slavia also has a 99 mm longer wheelbase than Rapid and offers more cabin space. It is also bigger than the first-generation Octavia.

The interior of the Skoda Slavia gets dual-spoke steering wheel that is also seen inside the Kushaq SUV. The central 10-inch touchscreen infotainment system also appears to have been borrowed from Kushaq SUV. The dual-tone interior also comes with features like rear AC vents, wireless charging, digital cockpit, panoramic sunroof among others.

As far as safety features are concerned, the Skoda Slavia will be packed with six airbags, ISOFIX, TPMS, Hill Hold Control, ABS with EBD, ESC among others.