Skoda Slavia all but unveiled, to get same TSI engines that power Kushaq SUV 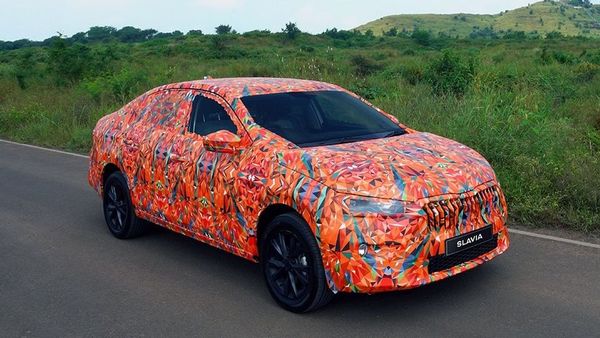 Skoda Slavia, seen here in orange camouflage, will comes with the same set of TSI engines that power Kushaq SUV.

Skoda Auto India has all but unveiled its upcoming premium mid-size sedan Slavia. As part of the carmaker's India 2.0 project, Skoda Slavia will be offered with a choice of two TSI engines, as well as a host of safety features including six airbags and more. The sedan is expected to officially break cover next month.

Based on the MQB-A0-IN platform, which underpins all the new generation Skoda and Volkswagen cars like Kushaq and Taigun SUVs, Slavia is is seen as a successor to the carmaker's popular sedan Rapid. It will be Skoda's third model to be introduced in India this year.

Under the hood will be the two TSI petrol engines that also power Skoda Kushaq SUV. The entry-level 1.0-litre TSI engine is capable of producing 113 hp of power from its three cylinders. The 1.5-litre four-cylinder TSI has an output of 148 hp.

The transmission job is also handled by Skoda's six-speed manual gearbox, which comes as standard. There will be a choice of a six-speed automatic transmission for the 1.0-litre TSI and the seven-speed DSG gearbox for the 1.5-litre unit.

Skoda will equip the 1.5-litre engine with active cylinder technology (ACT) which helps to increase the fuel efficiency. The system shuts down two cylinders when the engine load is low.