Home Auto Cars News Kwid Scores 2 Stars In Crash Test In This Country, Still Safer Than One In India

Kwid scores 2 stars in crash test in this country, still safer than one in India

The Global NCAP tests have revealed that Renault Kwid is the second car after Maruti Suzuki S-Presso, whose India-spec models have fared poorly against the South African counterparts.
By : HT Auto Desk
| Updated on: 05 Dec 2020, 02:04 PM 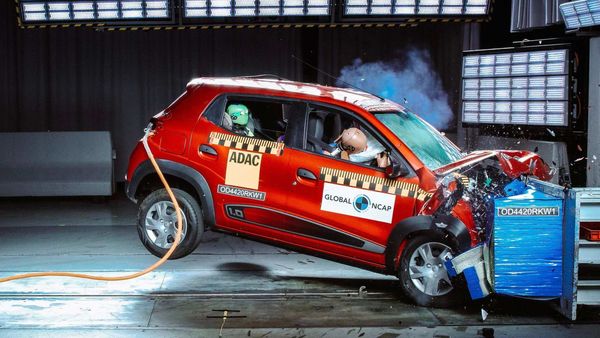 The Renault Kwid was first tested by Global NCAP when it was launched in India in 2016. It had received a dismal one-star rating four years ago. Since then, Renault has made substantial changes in its structure to improve its safety quotient. A version manufactured in Brazil was later tested by Latin NCAP where it achieved 3 stars, with side body airbags added to frontal airbags and ABS.

In October this year, Global NCAP once again put the Renault Kwid for a frontal impact test. The Kwid once again returned with a one-star rating for adult occupant protection.

Earlier this year, four more Indian cars underwent the crash test at Global NCAP. The newly-launched Mahindra Thar SUV passed the test with a four-star rating for both adult and child occupants. The 2020 Thar offers double frontal airbags as standard.

On the other hand, Maruti Suzuki S-Presso, Hyundai Grand i10 NIOS and Kia Seltos SUV fared rather poorly.

Maruti Suzuki S-Presso had failed to earn any stars in the latest round of safety ratings' test conducted by Global NCAP. The S-Presso failed to impress when tested for adult occupant protection, primarily because it only gets a driver-side airbag as standard.

Incidentally, the South Africa-spec model of the Maruti Suzuki S-Presso has done better than the India-spec model. The similarity in the results of both the tests, involving S-Presso and Kwid, raises questions about overall safety standards of the cars available in India vis-a-vis their overseas versions.