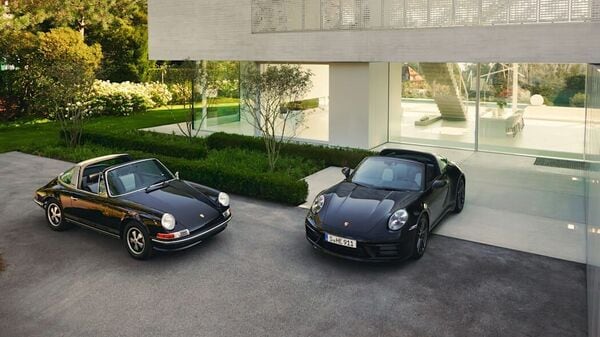 The car comes with unique exterior and interior design treatments that are similar to the Porsche 911 Targa 4 GTS. It gets a satin black exterior colour, centre-lock Turbo S wheels, Targa bar and special Porsche Design badges. The wheels come with gloss black brake callipers. The special edition Porsche 911 also gets a 50 Years badge on the engine cover.

Porsche says the 911 Edition 50 Years' cabin too comes with distinctive styling and features. It gets a numbered dash applique and embossed headrests. The steering wheel gets a unique logo at the centre, while the centre console gets the signature of Ferdinand Alexander, who first spearheaded the Porsche Design. The cabin of this special edition Porsche 911 also comes with 18-way adjustable Adaptive Sport Seats Plus, seat belts in Slate Grey theme. Also, it gets the features of the Sport Chrono Package.

Porsche says that each of the special edition 911 will be delivered with a Porsche Design Chronograph 1 watch, which comes as Porsche Design's modern take on the original one launched in 1972.

The car is expected to be available in showrooms later this year. However, it is not sure if Porsche will bring this special edition 911 to the Indian market.