Nissan Magnite is likely to be priced aggressively, undercutting most of its rivals.Upcoming Renault Kiger is expected to tread a similar path, triggering a price war in the keenly-contested segment.
By : HT Auto Desk
| Updated on: 20 Nov 2020, 07:28 PM 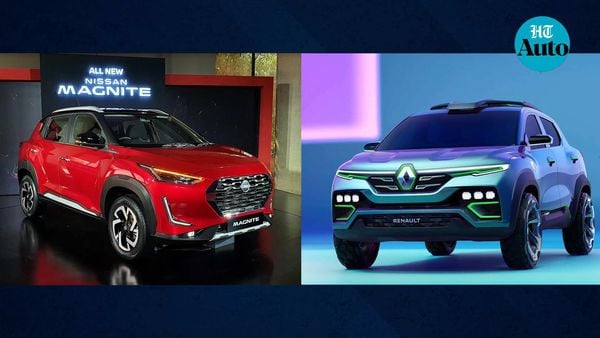 Nissan Magnite SUV (left) and Renault's upcoming Kiger SUV (right) are set to be the two latest entrant in the sub-compact SUV segment.

Nissan India has managed to generate a around the Magnite SUV which is expected to be launched later this month. According to leaked reports, the Magnite SUV price is likely to start from a very aggressive ₹5.50 lakh and top out around ₹10 lakh.

This could well make Nissan Magnite one of the most affordable offerings in a segment which has a variety of existing choices, but is increasingly becoming one of the most fiercely-competitive passenger vehicle segments in India. And to make the competition even tougher, a new offering from Renault - the upcoming Kiger SUV - is waiting for launch some time early next year.

Nissan will offer the Magnite SUV in 10 variants with a combination of three engine and transmission options. The price of the Nissan Magnite SUV would go up by a bit if one chooses to pick the optional Tech pack which will have added features like wireless phone charging, etc.

Unlike other rivals like Hyundai Venue or Kia Sonet, Nissan does not seem to keen to offer too many variants at varying price points. Instead, it is likely to leave the option to customize the vehicle by adding more features up to the prospective Magnite SUV buyers. This could not only help Nissan to keep the price down but also offer some of the features that are available in its rivals, for some extra dough.

This, however, does not mean that Magnite doesn't have its own claims to fame. Nissan states that the Magnite sports 'best-in-class driver visibility' and a high command eye position. It also boasts best-in-class shoulder room in the front row, along with rear knee room.

To give the SUV a more premium appeal, it will get 5-degree tilt of centre stack for driver-centric cockpit feel. Its 10-litre glovebox will be offered with illumination. The Sonet rival will also feature an 8-inch full flash touch screen with Android Auto and Apple CarPlay. The driver's screen will include a 7-inch TFT instrument cluster unit with built-in tyre pressure monitor. The company has announced that the Magnite will come with Nissan Connect with 50+ features (geo fence, roadside assistance, smartwatch connectivity among others).

Renault Kiger SUV, which was showcased earlier this week in a pre-production avatar, promises to tread the same path as the company aims to sell one million units of the SUV. The target, though seems steep for a carmaker that barely sells more than 10,000 vehicles in India every month, indicates that Renault would need to price Kiger aggressively to give itself a fair chance.

Though it remains to be seen how Renault prices Kiger, it is speculated that it too will try to undercut the pricing of most of its rivals when launched, just like Nissan Magnite aims to. With bold designs and sharp features, the Renault Kiger SUV, along with Nissan Magnite, could well set off a price war in the sub-compact SUV segment. It seems that the battle for supremacy in this keenly contested segment will boil down to the price and features on offer in each SUVs.