Nissan Magnite will boast several best-in-class features.Nissan claims that Magnite has been designed and developed keeping the Indian market in primary focus.Nissan is yet to announce its launch details.
By : HT Auto Desk
| Updated on: 22 Oct 2020, 09:47 PM 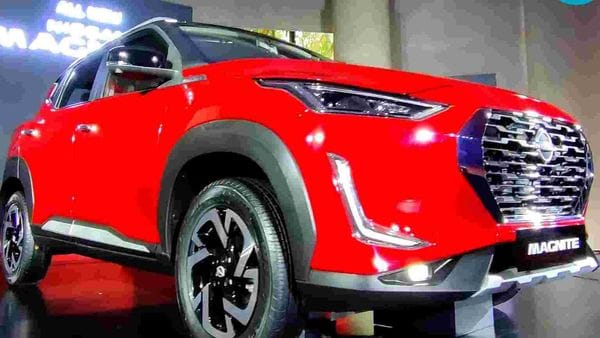 Nissan has recently revealed its upcoming Magnite subcompact SUV. The company is betting big on this car and it claims that the SUV offers several best-in-segment features. As per Nissan, the Magnite has been designed and developed keeping the Indian market in primary focus. The GT-R maker is yet to announce its launch plans, but the SUV is expected to go on sale in the Indian market within the next few months.

The Magnite comes largely based on the concept which was previously showcased a few weeks back. On the outside, it gets bold and sharp styling elements which are highlighted by its beefier bonnet, sleeker LED bi-projector headlamps and LED lightsabre-style turn indicators. Moreover, another highlight of its design include its L-shaped DRLs and LED fog lamps. The SUV also gets a large black grille featuring wide chrome slats on either side. The Magnite is going to be available in a choice of nine colour options which include five monotone and four dual-tone colours.

Coming on to the interior bits, the company claims that the Magnite sports 'best-in-class driver visibility' and a high command eye position. It also boasts best-in-class shoulder room in the front row, along with rear knee room.

To give the SUV an ultra premium appeal, it will get 5-degree tilt of centre stack for driver-centric cockpit feel. Its 10-litre glovebox will be offered with illumination. The Sonet rival will also feature an 8-inch full flash touch screen with Android Auto and Apple CarPlay. The driver's screen will include a 7-inch TFT instrument cluster unit with built-in tyre pressure monitor. The company has announced that the Magnite will come with Nissan Connect with 50+ features (geo fence, roadside assistance, smartwatch connectivity etc.).

Under the hood, the Magnite will be plonked with an HRA0 1.0-litre turbo engine featuring a five-speed manual transmission and X-Tronic CVT gearbox option. The company has remained tight-lipped on its output figures, but has managed to reveal that the engine will return a commendable 20 kmpl of fuel efficiency.