Nissan Magnite claims to have the lowest-in-segment maintenance cost of 29 paise per kilometre.Magnite from Nissan is already the most affordable sub-compact SUV in the Indian car market.
By : Shubhodeep Chakravarty
| Updated on: 19 Dec 2020, 13:42 PM 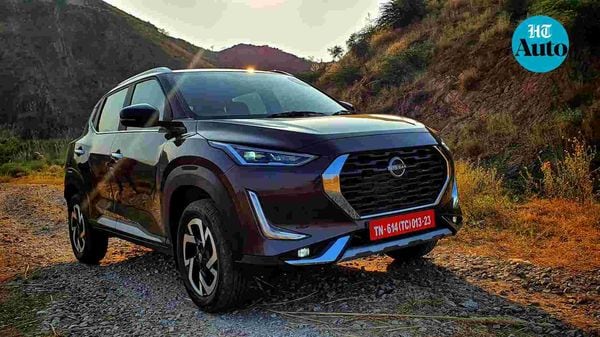 Nissan Magnite is offered in both dual-tone as will as single-tone colour options. (HT Auto/Sabyasachi Dasgupta)

Nissan Magnite has received 15,000 bookings since it was officially launched in the Indian car market as the most affordable sub-compact SUV - base price of ₹4.99 lakh (introductory, ex showroom). While Magnite has also received 1.50 lakh enquiries over the last two weeks, Nissan is now claiming its latest has the lowest cost of maintenance in its segment.

Magnite is being offered with two years' warranty (50,000 kilometres) which can also be extended up to five years (1 lakh kilometres). Nissan claims that the maintenance cost of 29 paise per kilometre (for 50,000 kilometres) is the best and most affordable in the segment in which Magnite competes in. It is a big and bold claim as the Japanese car maker appears determined to play the affordability card to woo buyers, while also projecting the vehicle as a capable and premium offering. "Nissan as a customer-centric brand, understands the importance of providing unique value-added services to its discerning Indian customers," said Rakesh Srivastava, Managing Director, Nissan Motor India. "Magnite comes with over 20 best-in-class and first-in-class features with the Nissan Promise of Lowest cost of maintenance."

The launch of Magnite has created a fair bit of ruffle in the sub-compact SUV segment and it sits below even several premium hatchbacks in the market. An optional Tech Pack at around ₹38,000 seeks to pack in more premium features and is available across most trims.

Nissan Magnite gets two petrol engine options and there is no diesel on offer. Its 1.0-litre Turbo engine claims to be the star performer and pits out around 97 bhp of power and has 160 Nm of peak torque. Nissan claims the new HRA0 engine borrows 'mirror bore cylinder coating' technology from its legendary sports car model - Nissan GT-R. This technology helps reducing resistance inside the powertrain. It also aids in cutting weight, improving heat management and combustion, thus improving the overall efficiency of the engine.

There's an option to choose between a five-speed manual or the much-acclaimed X-TRONIC CVT gearbox.

There are also multiple colour options to choose from and Nissan is also backing its ability to ramp up sales and post-sales centers to meet with the demand for the vehicle.