Home Auto Cars News Hatchback Vs Compact Suv: At ₹5 Lakh, Is Magnite A Threat For Altroz, I20?

Hatchback vs compact SUV: At ₹5 lakh, is Magnite a threat for Altroz, i20?

Nissan Magnite is the most affordable sub-compact SUV available in the Indian market and also undercuts pricing of premium hatchbacks like Tata Altroz and Hyundai i20.
By : HT Auto Desk
| Updated on: 07 Dec 2020, 09:53 AM 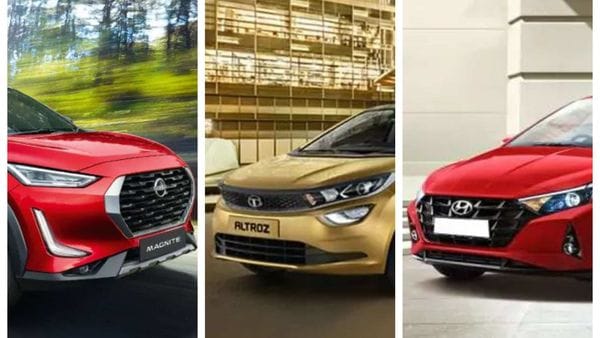 Nissan Magnite's pricing means that it also mounts a big challenge to premium hatcbacks in the country.

Nissan launched the much-awaited sub-compact SUV Magnite in the Indian market on December 2 at an introductory base price of ₹5 lakh (ex showroom). At this price, not only is the offering the most affordable in its segment but may have now entered into the list of options for those in the market for a premium hatchback. But does the Magnite have the bells and whistles to take on not just its direct rivals but also sway buyers away from the likes of Tata Altroz and the recently-launched Hyundai i20?

The premium hatchack space has continued to fare reasonably well in recent times despite the population explosion in the sub-compact SUV segment which currently features Kia Sonet, Hyundai Venue, Maruti Suzuki Vitara Brezza, Toyota Urban Cruiser, Tata Nexon, Mahindra XUV300, among others. But the entry of a comparatively affordable Magnite is likely to mount a challenge, especially because its top variant maxes out at under ₹10 lakh. In contrast, the 2020 i20 from Hyundai, in its top-of-the-line Asta Turbo Option with DCT sits at ₹12.53 lakh for the petrol engine. The top-end Altroz in petrol - XZ Urban - is at ₹7.89 lakh.

While the Hyundai i20 is a feature-packed car with the performance to boot, Altroz has also managed to fare really well due to its stylish exterior profile, among other factors. But Magnite is no sloucher. It has a fresh visual appeal, even if not outright flashy, while the XTRONIC transmission and a turbo petrol make it a compelling option in the sub-compact SUV segment.

Buyers with a clear preference for one segment or the other are likely to continue with their respective choices but for those prioritizing budget over vehicle segment, the lines may become blurry.

Magnite's pricing, backed by a spacious cabin and a capable drive, make it a sure look-in. Its feature list is also decent. Nissan though would have to establish itself as a car maker focused on quality - something which remains to be seen, and one with a robuts post-sales network. On these counts, both Tata Motors and Hyundai have a massive leg-up.

(Note: All prices mentioned above are indicative and are ex showroom)