Kia Sonet has carved a lead for itself but Nissan Magnite appears to be in hot pursuit to find space in the sub-compact SUV segment.Both Magnite and Sonet have their priorities straightened out but which suits which buyer?
By : HT Auto Desk
| Updated on: 18 Dec 2020, 10:17 AM 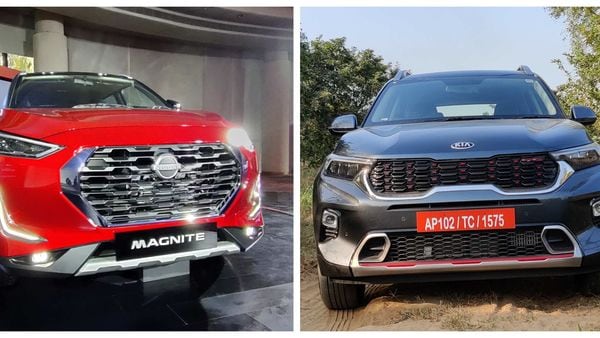 The battle between Nissan Magnite and Kia Sonet is perhaps the biggest currently in the Indian car market.

Nissan Magnite and Kia Sonet are the two biggest launches in the sub-compact SUV segment in India this year, if not in the automotive market at large. The segment may be extremely lucrative but it is also one in which every inch of space is hotly contested for. As such, both of these vehicles have made extremely promising starts in the market, finding takers by the dozen.

But while both cars sit pretty in the sub-compact SUV segment, they bring their own respective strengths to the roads, unique in many ways from even other rivals competing here.

Kia Sonet is the company's third product in the Indian market and has fired from the word 'Go.' Made for India and promised to be world class, the Sonet seeks to build on the success of elder brother Seltos which was Kia's debut product in India back when it came calling in August of 2019.

But while Seltos has managed to - and continues to - fare well, it is the more affordable and more compact Sonet that is now getting max traction. There are several factors which work in favour of the car - stylish looks, feature-packed cabin, a mile-long list of variants, plethora of transmission choices and that it is offered in both petrol as well as diesel.

Kia has managed to build a good brand image in the country which also plays into Sonet's charge here. The Koreans are ramping up sales and post-sales network at break-neck speed and this will only further bolster the prospects of cars it offers and those that will come in the times to come.

Available in Tech Line and GT Line, Sonet comes in HTE, HTK, HTK+, HTX and HTX+ variants in the former and GTX+ in the latter. Then there is a choice between 1.2-litre naturally aspirated petrol engine, a 1.0-litre petrol and a 1.5-litre CRDi diesel engine. iMT, five-speed manual, six-speed manual, DCT, AT - there's plenty to choose from in the transmission department as well.

Nissan has put all its proverbial eggs in one basket called Magnite and that may not be a bad thing. Off the bat, its price structure is its biggest strength. At an introductory price of ₹4.99 lakh (ex showroom), it is by far the most affordable in its segment. And while the base variant may be bare, Magnite's feature list on the upper variants isn't, even if it isn't quite in the same league as Sonet.

An optional Tech Pack at around ₹38,000 is a smart move to ensure prices are kept under check and those who may want feature additions like wireless charging, ambient light, puddle light, premium audio system - among others, can choose it over and above.

Among its strengths though is the fact that Magnite benefits from a solid turbo petrol engine and a really efficient XTRONIC transmission unit. The car has a relatively high seating position for a commanding view of surroundings while also offering decent amount of cabin space and comfort.

Where Magnite may lose some points is that its cabin isn't the most premium in the segment. Far from it, actually. Not that there's rowdy rattle and rumble but the car isn't going to win any awards for providing a solid cabin ambiance either. Then there is the perennial question mark about Nissan's post-sales service. The company, however, is looking at allaying concerns on that front by expanding rapidly across the country. Then there is the dilemma of not offering a diesel option. Those looking for a diesel car then, will have to keep away from Nissan.

When it comes to Sonet, its price structure now looks rather premium. Starting at around ₹6.72 lakh (ex showroom), it goes all the way up to ₹13 lakh (ex showroom) for the GTX Plus DCT in dual tone. That's almost three lakh more than the top-end Magnite. And remember, while Sonet is a feature-loaded car, the upper variants sitting in the higher price band are the ones to get most or all of these. Also, while Kia is working overtime to expand its post-sales network, it will obviously take time to reach anywhere close to what the likes of established players - Maruti and Hyundai - have in the country.

As such, both Magnite and Sonet come with their pros and cons. The former is priced extremely well and while not even trying to be flashy, checks the elementary boxes of good looks, spacious cabin, decent feature list and a good turbo engine unit. Sonet is easily more flashy to look at, offers better cabin features, has multiple engine and transmission options and is generally more premium.