The latest spy images reveal all the necessary details on the 2021 Mercedes S-Class' exterior as well as interior changes.
By : Prashant Singh
| Updated on: 13 May 2020, 01:55 PM 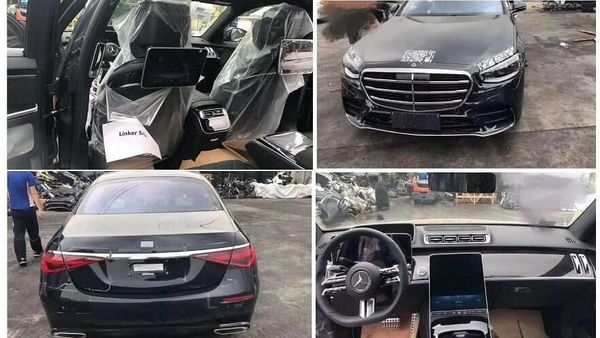 The next-gen Mercedes S-Class has been recently spotted inside out in the latest spy shots. While the 2021 S-Class is said to make an officially debut in September this year, its latest spy images have managed to reveal all the necessary details on the car's exterior as well as interior changes.

In terms of exterior appearance, the upcoming S-Class features a more fluidic design and with the generation change, the luxury sedan has grown sleeker. As earlier seen on the facelifted Mercedes E-Class, it now features a tad rounder appearance at its front fascia. The radiator grille is more curvaceous and so are the new bumpers. The headlamps now look slightly more compact and gel well with the overall new appearance of the updated model.

Coming over to the rear-fascia, the car will depart from the current styling with the use of the horizontal, split tail lamps. This design is reminiscent of the new Mercedes CLS (Coupe) and Mercedes CLA (Coupe & Shooting Brake). Also, the license plate indentation has turned slightly curvy which gels with the car's latest deign theme.

On the inside, the updates are huge. While the cabin of previous S-Class was already an epitome of luxury, the new-gen model has taken the level notch higher. First thing to notice is of course the virtual instrument cluster. This unit pops out from the dashboard as soon as the car is turned on, while on the other times, it sits inside the dashboard which contributes to a more minimalist styling. Other than this, the car gets a large portrait-style touchscreen tablet which sits on the centre console and appears to be floating out. Its also gets a new flat-bottomed steering wheel which looks compact and sporty. Overall, the cabin seems to have taken inspiration from the Mercedes Vision EQS concept.

As far as mechanicals go, the sedan will be featured in a couple of options including a 3.0-litre petrol, 2.9-litre diesel engine, and the Mercedes-AMG-developed 4.0-litre V8 petrol engine. The latter will also feature 48V mild-hybrid technology.

(Also Read: How car companies are gearing up to restart production after weeks of silence)

While its international debut will happen in September this year, expect it make its Indian appearance in late-2021.