The Lexus RZ electric vehicle will also get a yoke steering wheel, similar to the ones seen inside Tesla's Model S Plaid or Model X.
By : HT Auto Desk
| Updated on: 20 Apr 2022, 10:07 AM 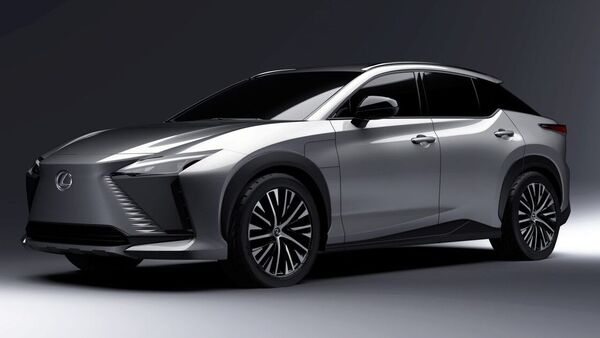 Lexus RZ EV, the latest electric SUV from the Japanese carmaker, will be officially unveiled on April 20.

Lexus has accidentally revealed images of the new 2023 RZ 450e electric SUV on its website ahead of the global premiere. Lexus will formally unveil its first dedicated electric vehicle today. As the company’s first dedicated electric vehicle, Lexus RZ will be launched in 450e variant initially, and will use a version of Toyota’s dual-motor electric powertrain found on the bZ4X electric SUV, which was recently introduced.

The leaked images show evidence of Toyota's new design language which include a spindle grille with a closed-off design. The SUV also features sharp-edged headlights on each side that touch the centre section of the fascia and above them sits a heavily creased hood. The 2023 Toyota RZ 450e electric SUV is based on the Japanese carmaker's e-TNGA platform, which also underpins the 2023 Toyota BZ4X and 2023 Subaru Solterra. The RZ 450e EV is likely to serve as an electric alternative to the NX SUV from the luxury car manufacturer.

The interior of the Lexus RZ 450e will get a massive touchscreen and a centre console clad in premium quality material on the inside. The design of the cabin appears similar to the NX. There is a 14-inch infotainment screen, which is similar to the one seen inside the Lexus NZ, besides a digital instrument cluster.

The Lexus RZ electric vehicle will also get a yoke steering wheel, similar to the ones seen inside Tesla's Model S Plaid or Model X. Yoke wheels force the drivers to keep their hands at the so-called 9 and 3 o'clock position, which experts say has advantages if a large airbag deploys.

The RZ 450e EV is likely to come with Lexus's steer-by-wire technology and dual-motor all-wheel drive. According to reports, the electric SUV will capable of generating similar output like BZ4X electric SUV with a maximum 214 hp of power. Lexus RZ 450e could offer a range of up to 480 kms on single charge or higher. It remains to be seen if Lexus offers a bigger battery pack compared to BZ4X in the new electric SUV.