The SUV has been made available in both Defender 90 as well as Defender 110 body styles.The all-new Land Rover Defender sports a max payload of 900 kg and a massive wading depth of 900 mm.The new Defender has been introduced in India as a completely built unit (CBU).
By : HT Auto Desk
| Updated on: 15 Oct 2020, 02:05 PM 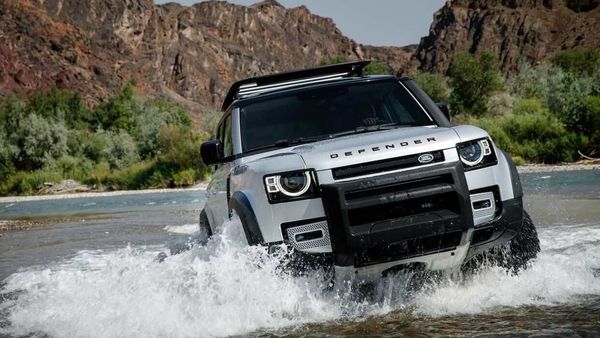 The all-new Land Rover Defender has gone on sale in India from Thursday and its bookings have already commenced.

The 'Defender' brand has been launched in India for the first time since the company entered the Indian market in 2009. It has been introduced in India as a completely built unit (CBU).

The new-gen Defender is based on a completely new D7X platform which, as per Land Rover, is the stiffest platform ever made by the company till date. The British carmaker also says that it has gone 'further and beyond' to develop the new Defender which has been tested for over 1.2 million kilometers with over 45,000 individual tests. "It is the toughest Land Rover ever made," claims the company.

The all-new Defender runs on a 2.0-litre four cylinder petrol engine which is known to develop 292 bhp and 400 Nm. The transmission option includes an 8-speed gearbox with Land Rover’s Terrain Response all-wheel-drive unit.

The SUV is known for its off-road capabilities and the company claims that the new-gen Defender is better than ever. It sports a max payload of 900 kg and a massive wading depth of 900 mm. It also gets a completely overhauled Terrain Response 2 system and air suspension. The latter comes standard on the Defender 110.

To aid its off-road prowess, the Defender gets an approach angle of 38 degrees, off-road breakover angle of 28 degrees (31 degrees on Defender 90) and off-road departure angle of 40 degrees.

In terms of cabin updates, the SUV comes with Pivi Pro infotainment system with over-the-air updates, a 12.3-inch all-digital instrument cluster, head-up display (HUD). The car can be had with either five, six or seven seat options.