In battle of three-row MUVs, Maruti dominates Toyota, Kia and other rivals

The three-row vehicle segment has seen a lot of actions with more carmakers focusing on gaining a foothold in the multi-utility vehicle space with the launch of premium offerings like Kia Carens and Hyundai Alcazar.
By : HT Auto Desk
| Updated on: 05 May 2022, 09:32 AM 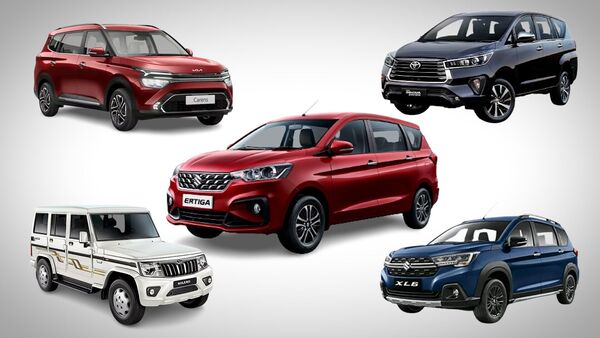 2022 Maruti Ertiga MPV emerged as the best-seller in the three-row segment in India in April.

Maruti Suzuki aims to dominate the three-row multi-utility vehicle segment with the launch of the new generation Ertiga and XL6. Maruti has shown eagerness to evolve its three-row offering especially after rivals like Kia and Hyundai came up with premium offerings like Carens and Alcazar. Once dominated by Toyota Innova Crysta, the segment now has more cars vying for larger share.

The growth in the segment has been particularly higher in the recent years, thanks to the Covid-19 pandemic. There is an increased demand for three-row cars as personal mobility has undergone changes due to the pandemic. In April this year, the MUV segment has seen growth with more than 40,000 units sold. Almost every three-row vehicles in the list of top five sold in April registered growth compared to the same month last year.

Maruti Suzuki Ertiga, launched in April, has undergone several changes. In its new generation, the Ertiga comes with a new K15C series DualJet petrol engine and a new set of 6-speed torque converter gearbox, promising an improved drive experience and ride quality. Besides these major updates, Maruti has also introduced new features in the Ertiga to stay more relevant among slew of feature-rich three-row cars of late.

Maruti sold 14,889 units of Ertiga in April. This is the highest number of Ertiga MPVs sold by the carmaker in a month in recent times. Among all other rivals, the new Ertiga sits clear with a lead of nearly 50 percent over its next rival in terms of sales last month.

Mahindra and Mahindra is more focussed on its SUVs than MPVs. Marazzo, the only proper MPV in its stable, has not made much of a mark in the segment yet. However, the old-school Bolero continues to be a favourite among three-row car buyers, especially in rural and hilly areas in India. Mahindra sold 7,686 units of Bolero, up by 25 percent compared to April last year when it sold 6,152 units.

It is often said that it's difficult for any car to replace the Innova Crysta in its segment for the sheer performance it offers along with versatility. Despite being the costliest option in its segment, Toyota's three-row MPV remains a strong and consistent performer with 6,351 units sold last month. This is an increase of more than 75 percent, the highest among the five, compared to what was sold in April last year.

Carens RV, the newest three-row model in the segment, had started with a bang since its launch in February. With more than 7,000 units sold in March, Carens threatened to take the segment by storm. However, chip crisis and long waiting periods have hit its prospects for now. Kia sold 5,754 units of Carens in April. With waiting periods stretching beyond six months, the numbers could fall in coming months too.

Maruti's premium three-row MPV XL6 was launched close to the heels of the Ertiga launch. The new XL6 has also gone a number of changes, including introduction of new engine, new transmission and several features like ventilated seats, connected car tech among others. Maruti sold 4,366 units of XL6 in April, the same month when it launched the new generation model. Priced between ₹11.29 lakh and ₹14.55 lakh, the XL6 rivals the likes of Kia Carens among others.