Ford promises that the new generation of the version will have the most capable V8 5.0 engine in the history of the brand.
By : Sabyasachi Dasgupta
| Updated on: 01 Jun 2020, 11:23 AM 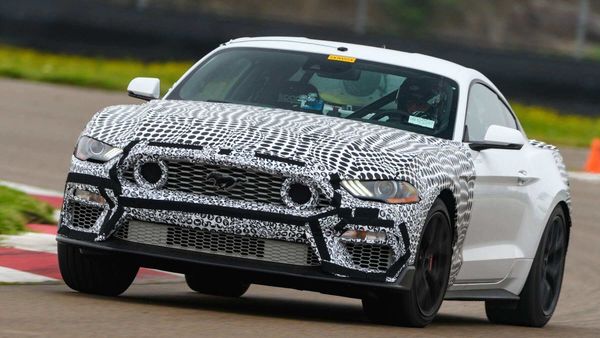 Ford promises that the new generation of the version will have the most capable V8 5.0 engine in the history of the brand.

Ford had announced the return of the Mustang Mach 1 in the United States, reviving the famous fastback coupe that debuted in the first golden age of muscle cars in the late 1960s.

The new Mustang Mach 1 is expected to be launched in the North American market later this year, as model year 2021. The information about its launch comes from an official statement in which some images of a test mule was also shared.

In the images one can see the model with a light camouflage layer that reveals some of the details about the new-look Mustang Mach 1. One of them is the new front face of the Mach 1 that has some modifications and a pair of round openings right on the grill. This place will probably house a pair of LED headlights like in the original models of the seventies, although they could also be used as part of the ventilation too.

The new Mach 1 will be based on the GT version and will have the 5.0-liter V8 Coyote engine that is expected to undergo a revision in order to increase the power to 475 hp.

In the words of Ford itself, 'the new Mach 1 will be true to its heritage, with a great look and being the most capable 5.0-liter Mustang on the track.'

The Mach 1 debuted as a 1969 model year and immediately earned its place in the Mustang line, with enhanced performance and dynamics using the GT's suspension.

In the following years, Mach 1 gained improvements over the Mustang GT, with a more affordable price than the Shelby and Boss versions.

Two years after its debut in 1971, in addition to being longer and wider than the original, Mach 1 gained competition suspension and more engine options.

In 1974, it went through major changes again, being redesigned for the first time as a hatchback. This generation of Mach 1 was produced for five years and, to improve driveability, offered the optional suspension kit Suspension Rallye .

Mach 1 returned as model years 2003 and 2004, combining modern mechanics with nostalgic design elements from the 70s. Its exclusive suspension, with larger Brembo front disc brakes, has improved performance on the track. The look was also highlighted with spoiler and strip on the matte black hood.