Ford had unveiled Mustang Mach-E in a glitzy ceremony in the US in November of 2019.The SUV with an electric heart claims to be quicker than a Porsche Macan.Ford hopes to challenge the dominance of Tesla in markets like Norway, US and China.
By : HT Auto Desk
| Updated on: 24 Apr 2020, 06:04 PM 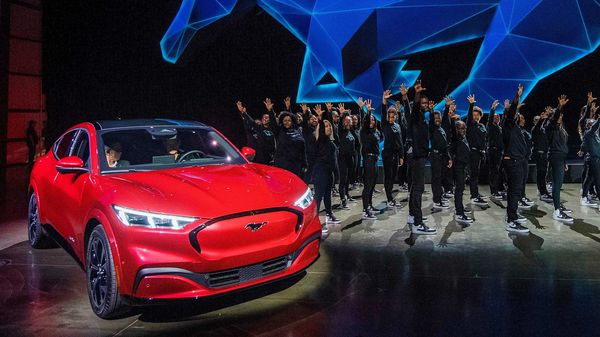 Ford made waves around the world when it showcased the electric SUV version of the world's best-selling sports car for decades. While some felt that the new vehicle was a disgrace to the lineage and legacy of Mustang, the Mustang Mach-E was a sure-shot show of intent that the American manufacturer is ready to go where the demand road is leading. Just that now there is a speed bump on the horizon.

Numerous reports have now claimed that those who had pre-booked the Mach-E in Norway have received messages that say production of these vehicles has been pushed from May to either June or July. It is also reported that the reason for the delay in production is the outbreak of Covid-19 around the world. "Despite the challenging situation around the coronavirus (COVID-19), we are now in full production planning and deliveries are scheduled to start in November 2020," the message in Norwegian reportedly reads when translated to English.

Customers with pre-booking slips have also been apparently told that they will get to make one last confirmation around the time production begins.

While Ford has not officially confirmed that the production has suffered a delay, this could well be the case as several manufacturers in Europe are only now resuming operations at their factories and that too at a pace which is a far slower than normal.

The Mach-E is one of the most eagerly-awaited cars of 2020 and hopes to take on Tesla's dominance in countries like Norway, China and the United States whenever it officially hits the roads. Ford has already made bold claims about the capabilities of the vehicle, even stating that it would be quicker than a Porsche Macan. Its design was inspired by the classic 1960s Mustang sports car and it will get a host of gadgetry on the inside. Production will be from Ford's plant in Mexico but reports previously suggested that Ford may also use its facilities in China to manufacture the vehicle. That may now get a rethink.

Pre-orders were opened for a deposit amount of $500 shortly after the unveiling on November 17 and was closed shortly after.